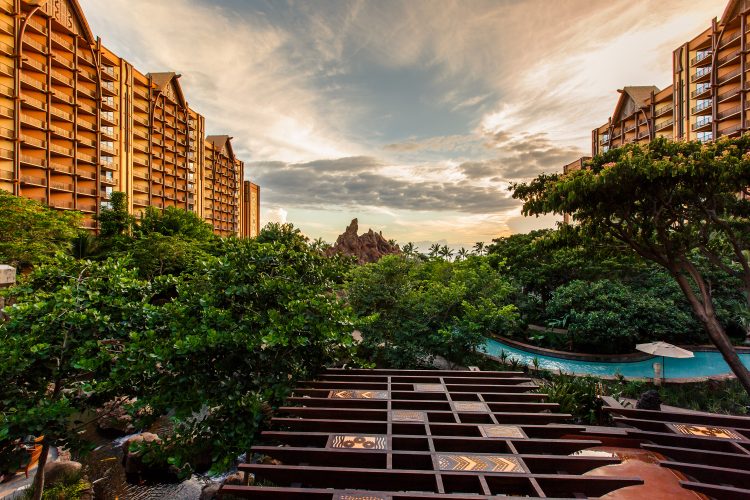 From the Walt Disney World News and written by: Michael

“Aulani focuses on our island culture, and the long term, sustainable relationship we must maintain with our ʻāina (land) is extremely important to us,” said Elliot Mills, Aulani’s Vice President and General Manager. “As a part of The Walt Disney Company’s global efforts in sustainability, we are proud to be Hawaii’s first LEED Silver certified resort and will continue to look for ways to respect our `āina.  It is our kuleana (responsibility and privilege)”

Disney built Aulani with the environment in mind, and the process for LEED certification has been ongoing for many years. One of the initial steps toward LEED certification began in 2007 with the choice of the resort’s location. Aulani being built on an already developed master planned resort location, meant that no trees needed to be cleared and no undeveloped lands were disturbed for Aulani.

The design of the resort also took into account many energy-efficient initiatives, including the use of waste heat for hot water needs. The American Society of Heating, Refrigerating and Air-Conditioning Engineers (ASHRAE) publishes a set of energy performance standards that must be met by all buildings under consideration for LEED certification, and Aulani beat these standards by up to 27 percent.  Among the solutions contributing to the reduction in energy consumption was harvesting the heat emitted from the resort’s large chillers which are used to keep the buildings cool and diverting it to generate domestic hot water as well as heating for the whirlpool spas and swimming pools. An additional benefit of this diversion is the reduction in energy and water needed for Aulani’s cooling towers.

The Walt Disney Imagineering team partnered with the local architect of record for Aulani, Architects Hawaii, to achieve these results.  “Collaborating on this momentous development was a wonderful experience.  We were excited to be working with a client that is strongly committed to establishing a sustainable environment for future generations,” said David Bylund of Architects Hawaii.

Another way the resort looks to the future to help the environment is by providing 34 electric car charging stations for plug-in vehicles within Aulani’s parking structure. These refueling stations are available for both Guest and Cast Member (Aulani employee) use.

According to the USGBC website, LEED is an internationally recognized green building certification system that provides independent, third-party verification that a building project meets the highest green building and performance measures. To obtain LEED certification, buildings must pass a rigorous checklist of sustainability points, including accomplishments in water efficiency, energy and atmosphere, materials and resources, and awareness and education. LEED certification is also about being stewards of the environment with sensitivity to the impacts on our natural word.

“Aulani’s LEED certification demonstrates tremendous green building leadership,” said Rick Fedrizzi, President, CEO & Founding Chair, U.S. Green Building Council. “The urgency of USGBC’s mission has challenged the industry to move faster and reach further than ever before, and Aulani serves as a prime example with just how much we can accomplish.”

About Aulani, a Disney Resort & Spa
Aulani, a Disney Resort & Spa is perfectly positioned on 21 beautiful oceanfront acres of Ko Olina on the leeward coast of Oahu. Just 17 miles from Honolulu International Airport and approximately 30 minutes from Waikiki, Aulani features 351 rooms, including 16 suites, and 481 two-bedroom equivalent villas, including 21 grand villas. Guests are invited to experience its world-class spa, restaurants and lounges, pools, kids’ club, and more – all uniquely designed for families to discover the culture, history and traditions of Hawai’i. Aulani was voted No. 1 in the Travel + Leisure World’s Best Awards 2014 in the category of Top Family Hotel: USA. For more information and reservations, visit www.disneyaulani.com or call (866) 44-DISNEY.

About Architects Hawaii Ltd. (AHL)
AHL is one of the largest architectural firms within Hawai’i and the Pacific Region.  With experience in architecture, planning, interior, and sustainable design, AHL has provided services for projects in all market sectors including hospitality, retail, residential, commercial, educational, industrial, institutional, military, and healthcare.  AHL’s staff of 82 includes 36 registered architects and 41 LEED Accredited Professionals.  For the past four years, AHL has been listed in Engineering News-Record’s Top 500 Design Firms and Top 100 Green Firms in the United States.