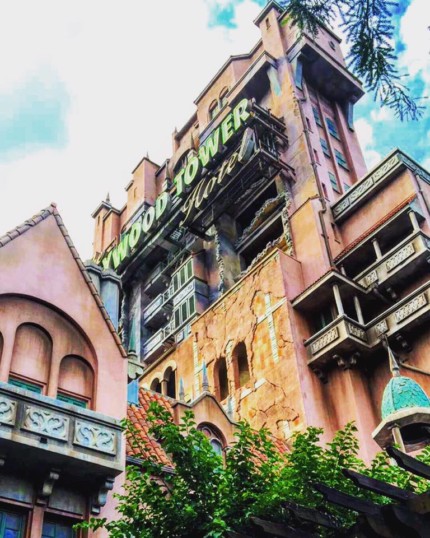 It’s the anniversary of the opening of the famous Twilight Zone Tower of Terror at Hollywood Studios! I found this throwback article that I wrote before we even moved to Florida, and I thought I’d share it with you! Enjoy! 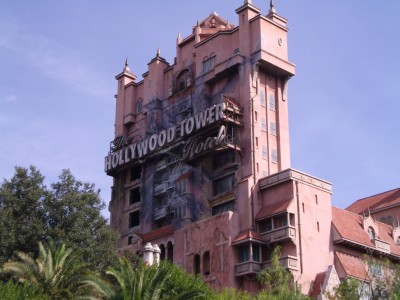 Happy Birthday to the Twilight Zone Tower of Terror ~ July 22, 1994

One of my favorite attractions at Walt Disney World is celebrating a birthday today!  Back on this day in 1994, The Twilight Zone Tower of Terror officially opens to the public on Sunset Boulevard at Disney/MGM Studios.

The Tower of Terror is a simulated freefall ride, and is themed after the popular tv series The Twilight Zone, hosted and created by Rod Serling.  The original Twilight Zone television show ran from 1956 through 1964, and basically became a cult classic.  The Disney attraction takes place in the fictional Hollywood Tower Hotel (inspired by the Hollywood Tower, a real structure built in 1929 and named an official historic landmark by the US Department of the Interior.)  Pictured below!

The story of the hotel attraction is inspired from elements of the television series The Twilight Zone, including the hotel being struck by lightening on October 31, 1939 and subsequently transporting an elevator full of unfortunate passengers to The Twilight Zone.  Like with a lot of Disney attractions, there’s a story behind it.  Being part of the actual “story” makes it even more fun, because it’s like you’re actually living and participating in the ghost story of the hotel.

For us, standing in line for The Tower of Terror is an attraction in itself.  When you start walking on the path towards the hotel, you get to see how much detail and planning actually went into this awesome ride.  To me, it really does look like an old fashioned hotel, like going back in time.  Once you get up to the lobby, it appears like time just stopped.  The hotel lobby still has everything you’d expect a lobby to have, except all the furniture is dusty, and seemingly frozen in time.  It’s pretty cool to see. 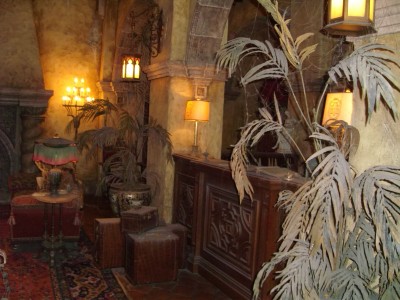 The Hotel front desk in the lobby. 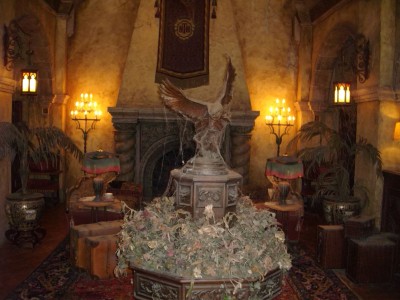 Middle of the Hotel lobby while standing in line. 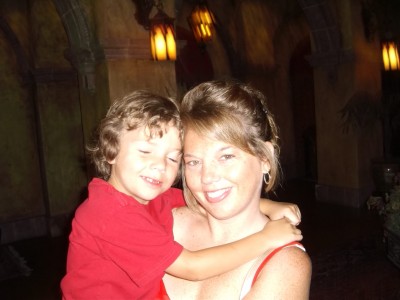 Me and my youngest son waiting in line.  Yes, I was telling him how fun it would be and not scary at all!  You know, you do what you have to do!  ????

So, while waiting in line, and after taking in all the historic looking sights, your bellhop directs you to the viewing room.  The room looks like a dusty old library of sorts, with televisions for everyone to view.  Once the room goes dark, the televisions come on, and you get to see the one and only Rod Serling, who is telling the story of the Hotel, and what happened that fateful night back on Halloween in 1939.  Through the magic of Disney, Mr. Serling delivers the information perfectly, just as if he was actually there talking to the group.  You get to see the people checking in, and getting into the elevator.  Of course, once the hotel gets struck by lightening, it’s implied that those unlucky guests become the ghosts of the hotel.

Once the history and story is revealed, it’s time to get on the elevator yourself.  Not your typical elevator of course.  The cart has rows of seats, with restraints to secure guests tightly in their seats.  Once the doors open, you actually become part of the story.  The elevator cart goes through the darkness, and you actually are in the Twilight Zone, with the “ghosts” of the hotel.  I admit, it does creep me out, even though I know what the ride is about.  All that riding through the darkness does eventually come to an abrupt end, when the “window” of the hotel opens, you see the entire park from many stories high, and…. down you go!  The elevator drops, and you literally pop up out of your seats, and it doesn’t just happen once.  The elevator drops multiple times, up you go, then DOWN you go.  What’s even more “magical” is that the ride isn’t the same each time you go on.  The elevator has multiple programs, so that the falls are different.  So, if you get off the Tower of Terror, and get right back on, you probably won’t get the same effect as you previously had.  How fun!

The whole experience of The Tower of Terror is actually quite elating.  It’s a rush.  Most people get off the ride, with huge smiles or looks of breathlessness and excitement….. or fear, whichever.  Don’t forget to check out the photo that gets snapped of the group, and check out the cool gift shop as well.  They recently added new items! 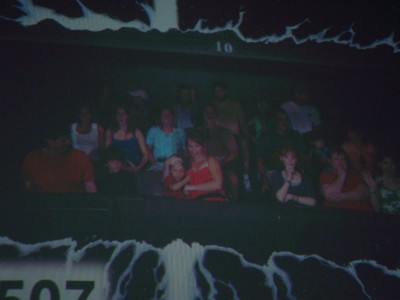 Overall, I think the anniversary of the Tower of Terror is definitely worth the mention.  It has become a classic thrill ride, and part of the overall experience when traveling to Walt Disney World.  It’s part of many people’s “must do” list, ours included.  So, Happy Birthday to the Twilight Zone Tower of Terror!  Lets look forward to many more years of scares, screams and all out fun!