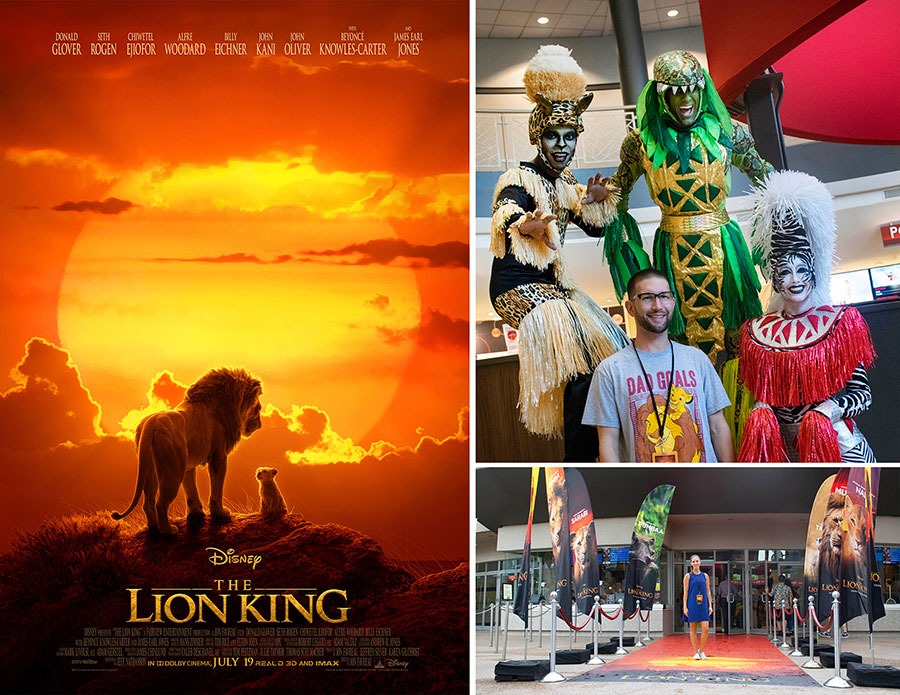 From the Disney Parks Blog and written by: Kelsey Noland

We all have that “one movie” that turned us into Disney fans and for me that movie is “The Lion King”. When I first heard The Walt Disney Studios was planning a live-action version I was over the moon and couldn’t wait to relive the story on the big screen again. (Of course, I knew exactly where I would be going!)

There’s nothing quite like seeing a Disney film during opening weekend at AMC Theatres at Disney Springs. We celebrated the big night with some of our Disney Parks Blog readers who got the red-carpet treatment and a little surprise and delight from “extROARdinary” stilt walkers. Guests also got to hear a little from special guest Don Hahn, one of the original producers on the animated “The Lion King”. I had the pleasure of sitting down with Don to get his thoughts on the new film and hear about his amazing career working with Disney Legends. Check it out!

“The Lion King” just celebrated 25 years and continues to be such a beloved Disney film for fans of all ages. What’s it like to now see the story being retold with new technology as a live-action film?

It’s a little odd and exciting at the same time. It’s like you’re raising a child and you send them off to summer camp and they look a little different. We had no idea that The Lion King would be so successful 25 years ago and seeing what Jon Favreau and the entire team has done with the story is nothing short of a modern miracle!

The music in “The Lion King” is so impactful—can you share a little more with readers on how important music is in storytelling?

Music is key in storytelling and Disney does it so well. You see music in key moments of film when a character is moved by deep emotion and so much so that they have to sing. Music represents emotional expression and what it means to be human. It’s just as important as the visuals and talent and is a key tool in the toolbox. When it all comes together it creates magic.

Who’s your favorite character in “The Lion King” and why?

I love Pumbaa and Timon because they’re so funny and offer a welcome relief in the film but I also really love Rafiki. He represents this wise old man you often see in many popular stories and helps lead Simba on his journey of growing up. One of my favorite scenes is when Rafiki is leading Simba through the forest to that iconic moment when he sees his reflection and realizes his father is with him.

You’ve had a really amazing career so far producing many Disney films and collaborating with incredible people including Disney Legends. Was there anyone in particular you’ve worked with that was really impactful to your personal or professional life?

There’s been quite a few— Woolie Reitherman who was one of Disney’s Nine Old Men was a big influence on me. Walt gave him the studio when he decided to pursue his work with the theme parks and I was just so impressed by his work and I learned so much from him. I actually had my own “circle of life” moment because he was teaching me his job which I would later take on as a producer. I also learned a lot about animation and music from Walt Stanchfield, Howard Ashman and Hans Zimmer. I had no idea how influential they would be at the time!

I know you’re a creative at heart whether it be working in film, writing or even painting. Is there any advice you have for our readers who are aspiring creatives?

Don’t just wait for the phone to ring or for an opportunity to find you—make your own goals and listen to the passion in your gut. Today is the golden age for making your own content and there are so many tools and resources than ever before for creatives. Go out in the world and tell your story no matter how many people read it or see it. Create for yourself.

Anything else you’d want to share with readers of the Disney Parks Blog about the live-action “The Lion King”?

Stories are meant to be retold and it’s exciting to see that happening. There’s a whole new generation of filmmakers of people who haven’t grown up with the animated films and I think that’s exciting. I didn’t know Walt Disney but I know he was forward-thinking and I think he would really be excited about the future. There’s always a new story to be told around every corner and it’s our job as storytellers to tell them.

See #TheLionKing in theatres now! Get your tickets here.