For nearly 50 years, the happy haunts of the Haunted Mansion have welcomed guests to their delightfully unlivable abode. In honor of the upcoming 50th anniversary of this beloved attraction, we are introducing you to 13 of the ghoulish ghosts who haunt its halls:

Madame Leota is, quite literally, a figure head in the Mansion with ominous power and presence. She is the connection between you and the spirit world. Leota is found floating in the dead center of a séance circle, calling out for “serpents and spiders, tail of a rat.”

The Hatbox Ghost is very proud of his hatbox collection and considers it his crowning achievement. His favorite is lined with deep mauve velveteen and he believes it’s best viewed from inside. The Hatbox Ghost briefly appeared in the Haunted Mansion when the attraction first opened. Then, he mysteriously vanished, only to reappear in 2015. As Doom Buggies creep by, he loves to show off his famous trick. Watch as the Hatbox Ghost loses his head and see it reappear inside his hatbox!

Three hitchhiking ghosts—Ezra Beane, Professor Phineas Plump and Gus—are always looking for a way out of the Mansion.

Ezra is the tallest of the hitchhiking trio and lived his life as a vagabond. Some would consider him the leader of the three.

In his corruptible, mortal state, Phineas Plump traveled the country hocking snake oil at train depots. He crossed over to the spirit realm while experimenting with a new miracle concoction and still keeps his trusty carpet bag by his side, eager to make another sale.

Poor Gus served most of his time for a crime he did not commit. Upon encountering this pint-sized phantom, it is easy to tell he is no criminal mastermind. His playful innocence is apparent as he always looks at the bright side of the afterlife.

As your Doom Buggy enters the mausoleum and leaves the cemetery behind, the three hitchhiking ghosts stand at the bend, looking for a ride out. As you turn the corner, you may see their reflection in a mirror as they make themselves right at home and take a seat with you in your Doom Buggy.

Constance is the far-from-blushing bride adorned with pearls—one string for each of her marriages. Unfortunately, her five husbands each met their untimely demise, leaving Constance a widow (time and time again). She is featured in many portraits throughout the mansion and can first be seen in the Portrait Chamber sitting atop one of her husband’s tombstone.

Constance also greets you in the attic, surrounded by memories of her past five marriages, and reciting her haunting vows with an axe that appears in her hands. Here, she is once again featured in portraits with her dearly departed grooms, all of whom have disappearing heads.

Victor Geist, the quirky organist, plays the Haunted Mansion’s signature tune in the ballroom to everyone’s delight. Dozens of ghoulish banshee heads float out of his organ like visible musical notes. As your Doom Buggy travels along the upstairs walkway, look down onto the Grand Ballroom and witness a ghostly party, with a long, dusty table set for a feast—including a cake with 13 candles. There, you will find Victor playing his music for the “spirited” guests.

Lastly, the Ghost Host, one of the 999 happy haunts who call the Haunted Mansion home, welcomes “foolish mortals” into the attraction. He is heard, but never seen throughout the attraction. If you want to join these spirits at the Mansion, he points out “there is always room for one more!”

We hope you come out to celebrate 50 years of happy haunts at the Haunted Mansion at Disneyland Resort! 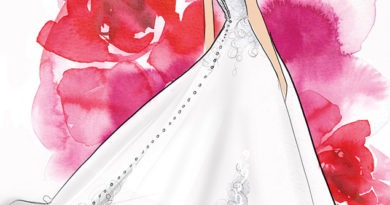