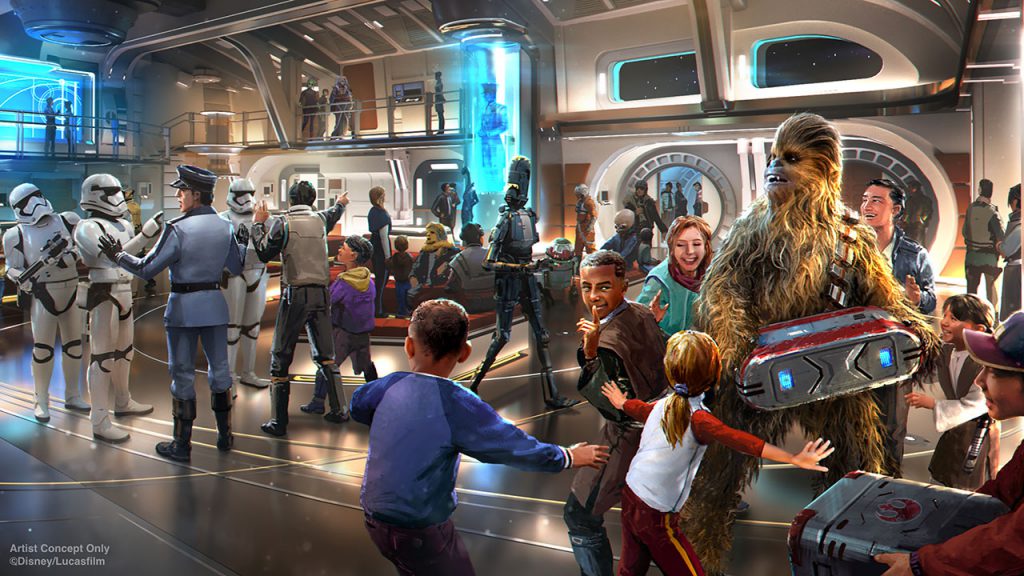 The 50th Anniversary of Walt Disney World Resort will be one of the biggest ever! We’re extending the celebration to all four Resort theme parks with amazing attraction openings, new entertainment, food and beverage, merchandise and more.

And today at D23 Expo 2019, Disney Parks, Experiences and Consumer Products Chairman Bob Chapek unveiled new details on some exciting guest offerings coming to the Walt Disney World Resort for the 50th Anniversary and beyond.

Here’s a roundup of what’s to come:

Star Wars: Galactic Starcruiser will be a new, first-of-its-kind vacation experience where guests will check in for a two-night adventure aboard a glamorous starship. Once onboard, guests will interact with characters and become active participants in stories that unfold around them on their galactic journey.

Also at Walt Disney World Resort, we’ve got big plans for our multi-year transformation of Epcot, with new experiences that will make the park more Disney, more family, more timeless and more relevant to the millions of guests who visit each year.

The park will be unified with four neighborhoods that each celebrate a unique aspect of what makes Epcot so special. Where Future World currently stands, three new neighborhoods will spring up: World Celebration, World Discovery and World Nature. And World Showcase will continue to celebrate culture, cuisine, architecture and traditions from around the world.

At World Celebration in Epcot, Spaceship Earth will remain the park’s grand icon but the journey will be transformed with new scenes reflecting the universal nature of the human experience. A new guide and all new narration will focus on the storytelling that brings people together.

A new pavilion at World Celebration will be the home base for Epcot’s signature festivals, providing a stunning view of World Showcase and an ideal spot to witness the park’s nighttime spectacular. This three level structure will have one of the most remarkable designs at any Disney park.

At the World Discovery neighborhood in Epcot, Guardians of the Galaxy: Cosmic Rewind will feature the first reverse launch into space! The thrilling, family-friendly attraction will feature a never-before-seen storytelling coaster that rotates to focus on the action – wherever it may be.

Also, an expansion of the Mission: SPACE pavilion, the new restaurant Space 220, will open this winter as an out-of-this-world culinary experience with the celestial panorama of a space station, including daytime and nighttime views of Earth from 220 miles up.

In World Showcase, we’ll welcome the first attraction inspired by Mary Poppins in Cherry Tree Lane, which will join the United Kingdom pavilion as an entirely new neighborhood!

In the China pavilion, “Wondrous China” will take guests on a spectacular journey across China, filmed and presented in a completely seamless 360-degree digital format.

The film “Canada Far and Wide in Circle-Vision 360” will debut in January 2020 in the Canada pavilion with new scenes and a new story.

The France pavilion will offer even more for guests to discover, including a new “Beauty and the Beast Sing-Along” in January 2020. And in summer 2020, the much-anticipated attraction Remy’s Ratatouille Adventure will open, as well as a delicious new restaurant called La Crêperie de Paris.

In World Nature, The reinvention of Epcot will include Journey of Water, Inspired by “Moana.”  This first-ever experience inspired by the Walt Disney Animation Studios’ hit film will let guests interact with magical, living water in a beautiful and inspiring setting.

And the Land pavilion’s new film “Awesome Planet,” which showcases the spectacular beauty, diversity, and dynamic story of the planet in World Nature, will begin welcoming guests in January 2020.

And following the limited time run of Epcot Forever at Epcot, a new nighttime spectacular called  HarmonioUS will be the largest ever created for a Disney park. It will celebrate how the music of Disney inspires people the world over.

At D23 Expo, we shared a first look at the newly themed Chinese Theater that will be home to Mickey & Minnie’s Runaway Railway when it opens at Disney’s Hollywood Studios in spring 2020.

This first major Mickey-themed ride-through attraction will put you inside the wacky and unpredictable world of a Mickey Mouse cartoon short where anything can happen!

And planned to debut in late 2020, Disney Genie will be a revolutionary new digital offering to enhance the way guests plan for and experience a trip to Walt Disney World Resort.

Disney Genie will make planning easier and more fun by providing guests customized itineraries geared to princesses, thrill seekers, foodies, families and more. Guests will even be able to tell Disney Genie what they want to experience, and it will quickly evaluate millions of options to present them with an optimal day.

Reflections: A Disney Lakeside Lodge, will be a unique hotel and proposed Disney Vacation Club resort inspired by the wonders of nature and artistry of Walt Disney.

Also, at Magic Kingdom Park, the TRON attraction will be called TRON Lightcycle Run. As regular readers know, this attraction lets riders board a train of two-wheeled Lightcycles and experience the energy, lights and excitement of TRON’s high-tech universe.

As you can see, it’s going to be one of the most extraordinary periods of growth and expansion in the history of the Walt Disney World Resort! Keep checking the Disney Parks Blog for future updates on today’s news and more.