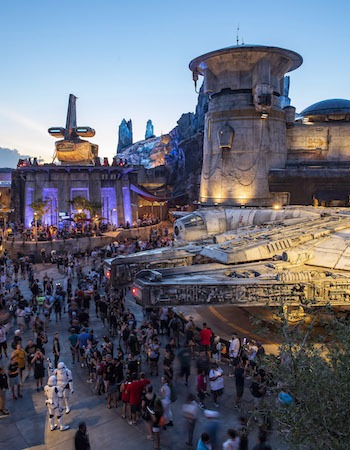 This will be a day I long remember.

I arrived at Disney’s Hollywood Studios in the pre-dawn darkness early this morning and watched as thousands of cheering fans became the first official guests of Star Wars: Galaxy’s Edge, the amazing new 14-acre land that opened to the public today here at Walt Disney World Resort. There were more people wearing Star Wars apparel than you could shake a Gaffi Stick at!

Star Wars: Galaxy’s Edge transports you to Batuu, a planet on the Outer Rim of the Star Wars galaxy far, far away. Inside, you can explore the bustling Black Spire Outpost, full of authentically Star Wars sights, sounds, smells and tastes. I hung around the outpost for several hours this morning, just soaking in the atmosphere. Star Wars: Galaxy’s Edge is the largest land expansion ever in a Disney park, so there’s plenty to look at, but I’d never seen it quite like this – at sunrise.

Hanging out down by the Millennium Falcon is a great spot to watch the sky come to life in the morning, as the sun peeks up over the spaceport and bathes the rocky spires in warm light. The Falcon’s look shifts subtly, too, as the sky brightens. The whole area just seems to glow.

There are other excellent locations to view the sunrise, too, of course. The Black Spire Outpost marketplace is almost kaleidoscopic in the morning when the sun’s rays start filtering in through the area’s hanging décor. Or perhaps you’ll like to take up residence with the Resistance over in the forest on the outskirts of town, where you can watch the sun climb up and over the mountainous landscape.

This post includes a few shots our Disney photographers captured at different times this morning, so you can get a better sense of what I’m talking about. But if you want to take in this awe-inspiring sight for yourself, I’d suggest taking advantage of the “Extra” Extra Magic Hours that begin this Sunday, Sept. 1, at Disney’s Hollywood Studios and run through Nov. 2, 2019. During this limited-time benefit, the park will open several attractions beginning at 6 a.m. each day, including Star Wars: Galaxy’s Edge (subject to capacity). This extra time in the park is available to all guests staying in a Disney resort hotel as well as other select hotels, and also extends to Disney’s Animal Kingdom and Magic Kingdom Park.

Starting in September, sunrise in Orlando doesn’t happen until after 7 a.m., so if you arrive early, you’ll get to see Star Wars: Galaxy’s Edge fully transition from night into day – an experience I highly recommend! Get more information about “Extra” Extra Magic Hours here. And until next time…’Til the Spire!