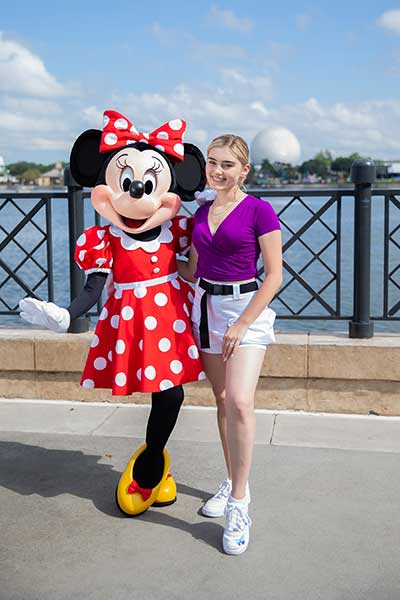 Radio Disney ‘Next Big Thing’ alum Meg Donnelly (“With U”) will shine her rising star on Future World in Epcot on Friday and Saturday when she launches the first weekend of Disney du Jour Dance Party as part of the Epcot International Food & Wine Festival. Also known for her Disney Channel breakout role in the hit film “ZOMBIES,” Meg brings her free-spirit style and energy to the dance party, which is open to all park guests.

Meg debuted her single “SMILE” in 2018, and it quickly hit #1 on Radio Disney’s TOP-50 airplay chart. Her current single and music video, “With U,” is available across all download and streaming platforms. Watch for the release of Meg’s debut album this fall!

Back this year by popular demand, the nightly Disney du Jour Dance Party electrifies Epcot in a new location at the Future World East stage throughout the Festival. You can expect high-energy fun as a DJ spins chart-topping tunes and guests break out their grooviest dance moves. On Fridays and Saturdays, the party features even more entertainment with Disney character appearances and live performances by artists from Radio Disney and Radio Disney Country. You never know when Remy, Emile and other Disney pals will rock onto the scene!

We just learned of other new Radio Disney artists who are scheduled to appear at upcoming Disney du Jour Dance Parties:

The Epcot International Food & Wine Festival runs 87 days from Aug. 29 through Nov. 23. Reservations for special programming and premium Festival events including Eat to the Beat Dining Packages can be made by calling (407) WDW-FEST.