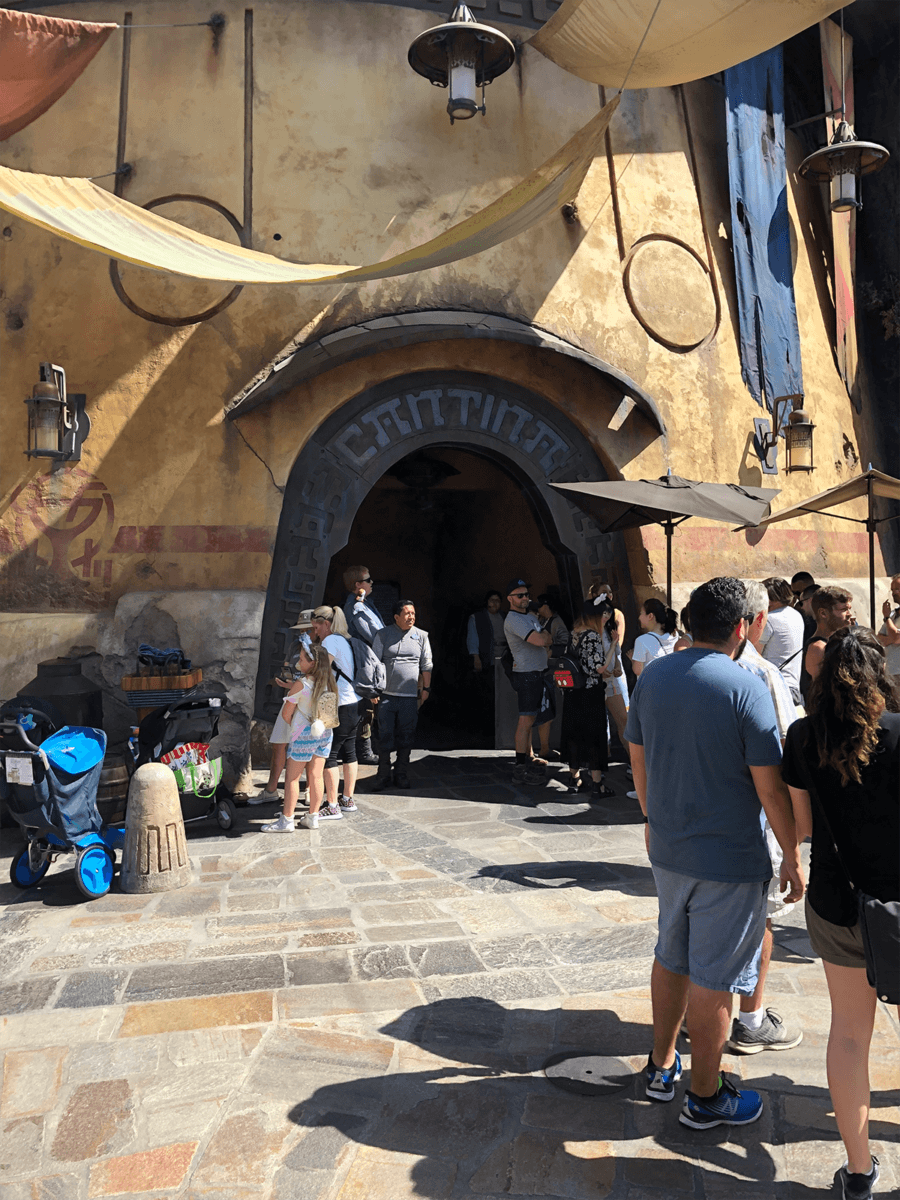 Anyone who’s lived in South Jersey (or the greater Philadelphia for that matter) has heard of Olga’s Diner. It’s a landmark, even though it was closed for many years. An institution, if you will.

Oga’s Cantina is nothing like Olga’s Diner, and it’s a very good thing.

Oga’s Cantina looks, feels, sounds and smells like it should. Exactly like it should. Stepping inside truly is like walking into the sort of bar you could find on nearly any Outer Rim world. It’s dark, sort of loud and packed with people even early in the morning. There are only a handful of tables, seemingly reserved for larger parties. 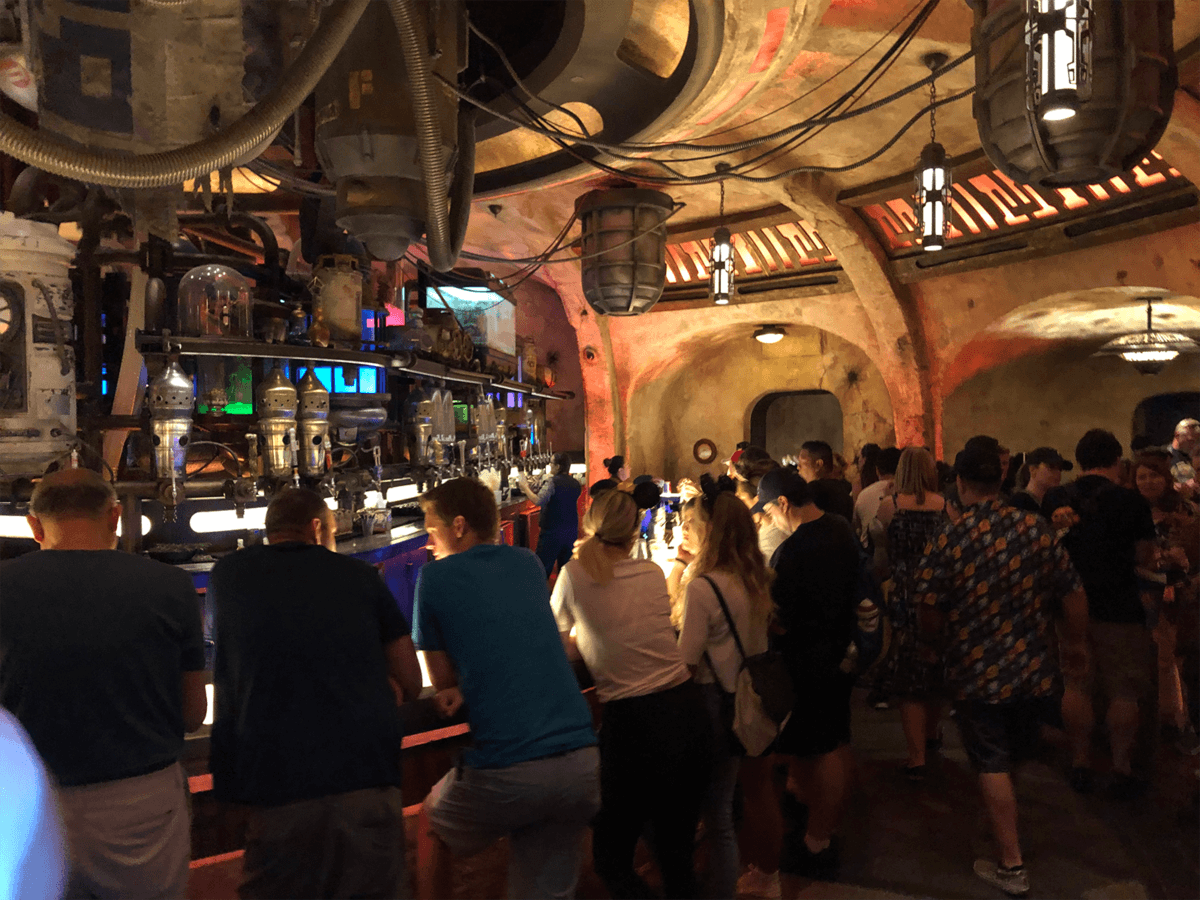 Our party of seven arrived a few minutes late for our 10:30 AM reservation. After a reasonable 20 minute wait, we were seated at the far left end of the bar. 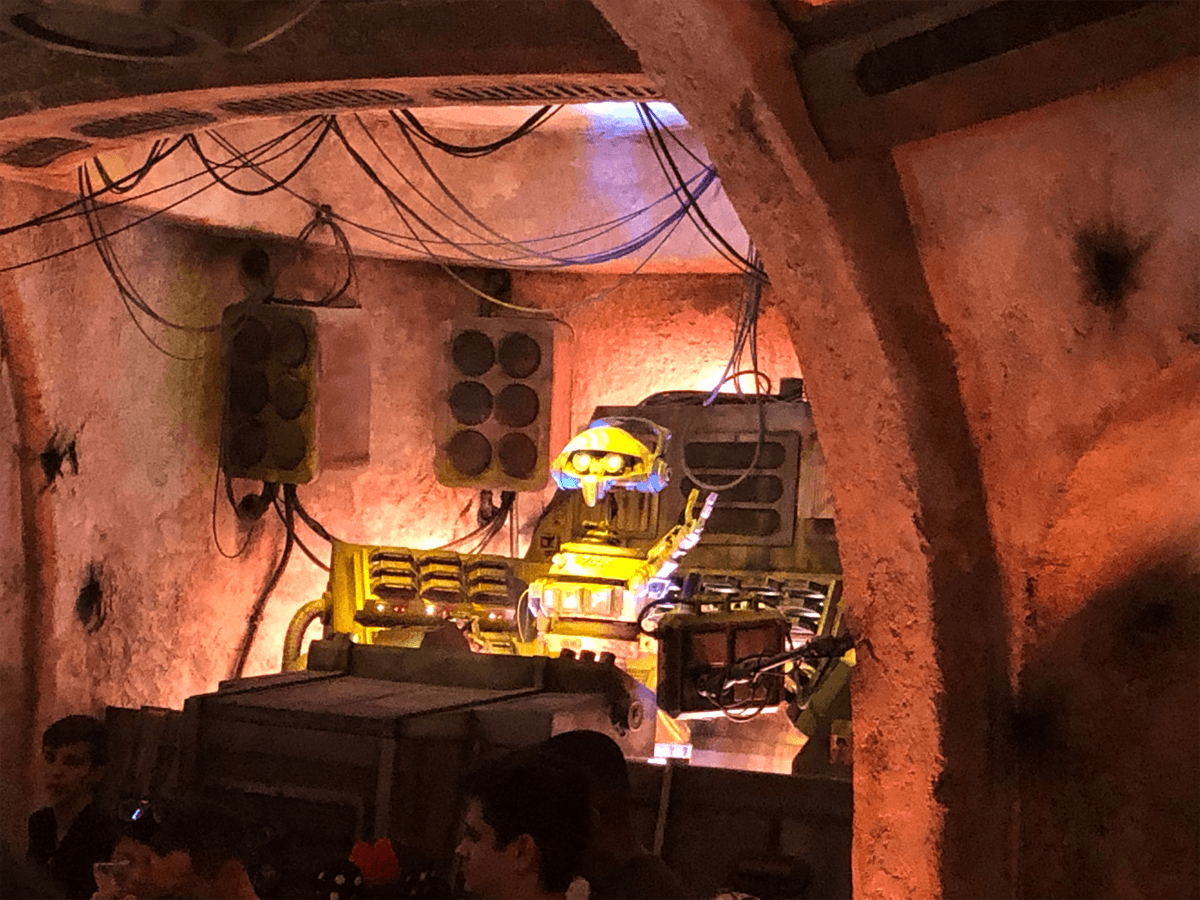 DJ Rex, Oga’s house DJ, spins tunes and keeps the crowd entertained. The music is a mix of remixed classics and original tracks. He does a terrific job.

Parents, be forewarned: the menu is mostly adult beverages and a few little snacks. There are some kid-friendly drinks, but kids were not what they had in mind for Oga’s Cantina. 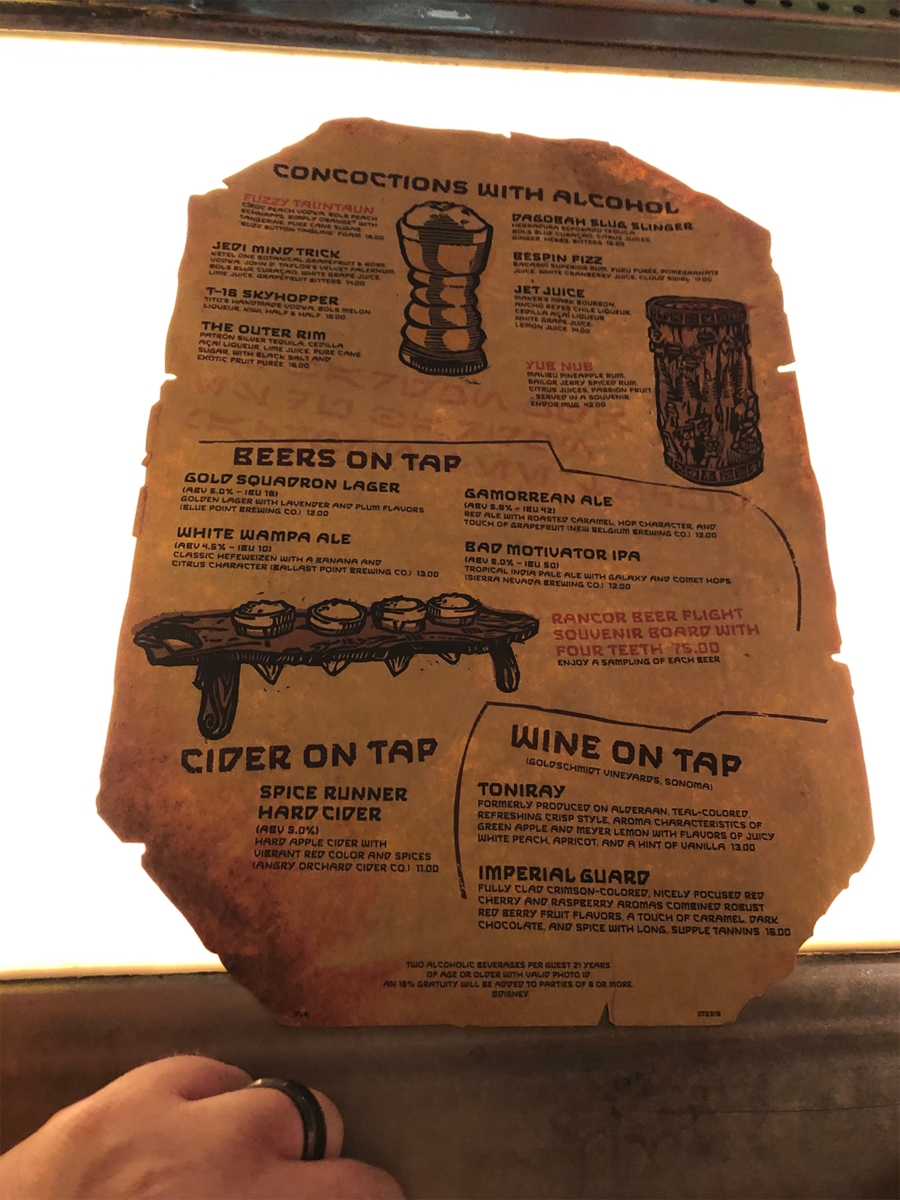 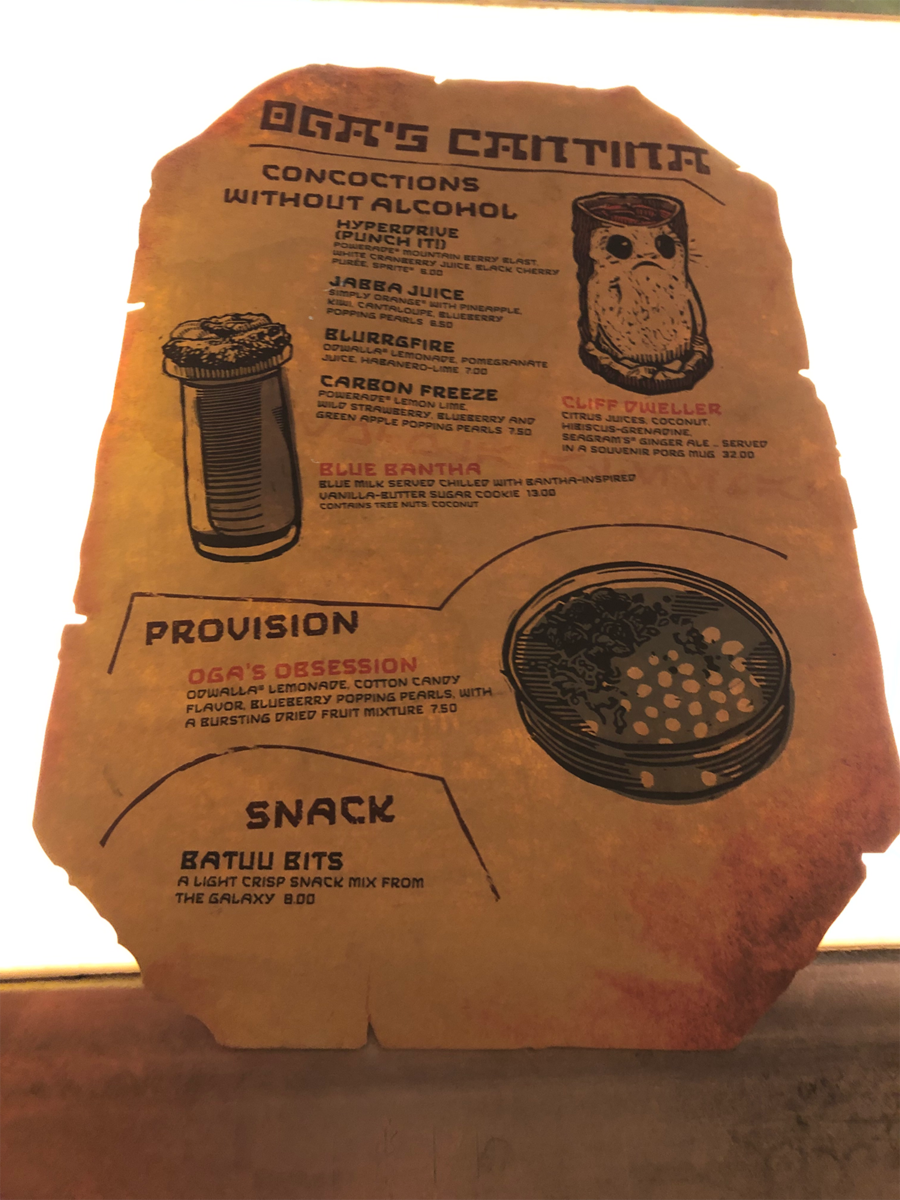 It’s a limited menu, and for a reason. The idea is to get in, have a drink or two, and continue on your way. If you’re looking for a cool spot to escape Batuu’s blazing sun, Oga’s will offer a temporary respite but no more. That being said, there’s a lot of awesome packed into that little space.

The setting and ambiance couldn’t be more perfect. Behind the bar is a mess of gurgling tanks, strange canisters, churning vats and an animatronic amphibian, whose “leavings” feature prominently in of the bar’s signature cocktails.  Everywhere you look, there are details to notice and things to snag your attention.

Like much of the Star Wars universe, it has that “lived-in” look and feel.  There are chunks missing from the walls.  Blaster fire, no doubt.  The counter of the bar looks well worn, and the bar periodically looses power, prompting one of the bartenders to physically beat the junction box until power is restored. 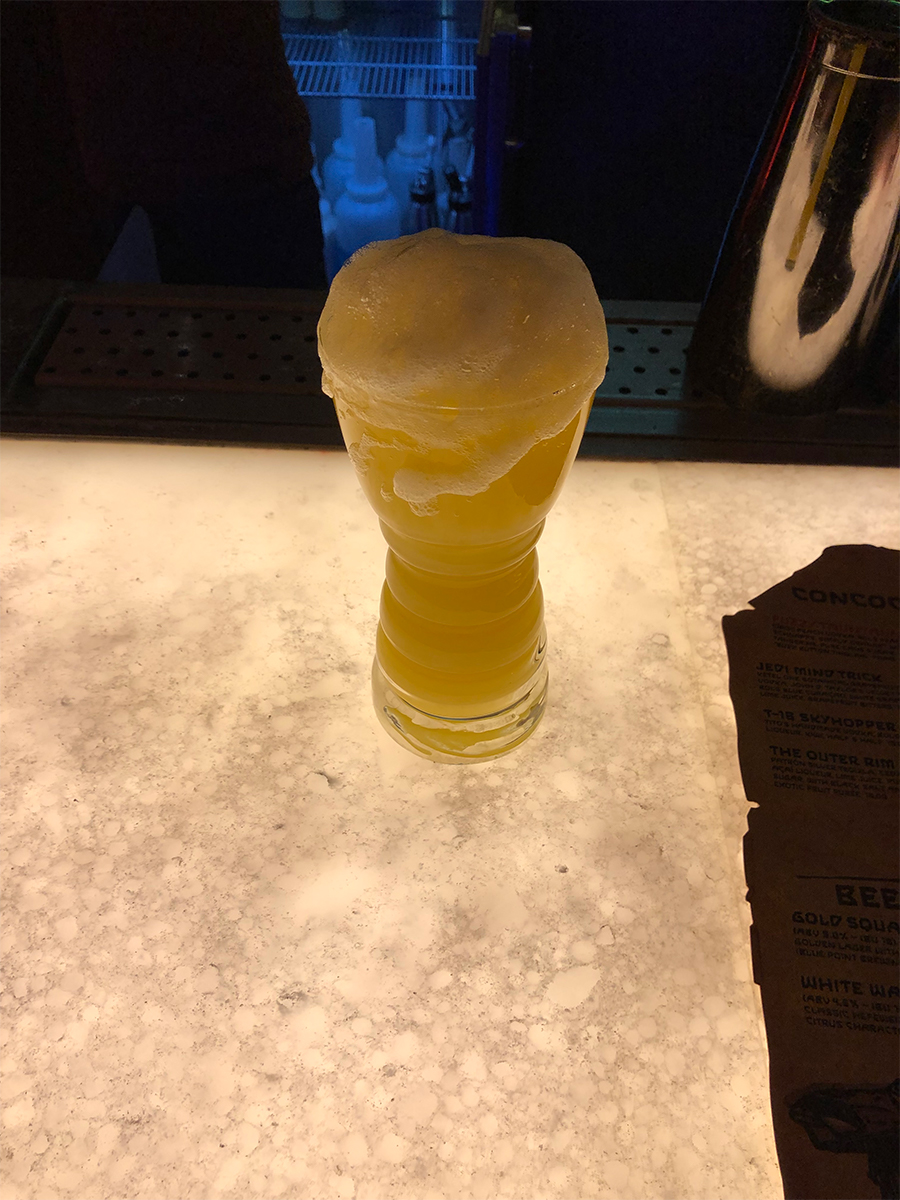 My choice was the “Fuzzy Tauntaun”. A sweet and lightly acidic mix of tropical and citrus flavors, this is a great way to cool down from an afternoon of battling the First Order (or the Resistance, if you swing that way). The foam atop this drink is peppery and leaves a modest tingling sensation on your lips and tongue. Like eating a small amount of PopRocks, if you’re familiar with the classic 80s candy. It’s a delicious cocktail, and thanks to the shape of the glass, the ice doesn’t dilute the drink. The ice stays in the top half of the glass, cooling the drink as it passes through the ice. 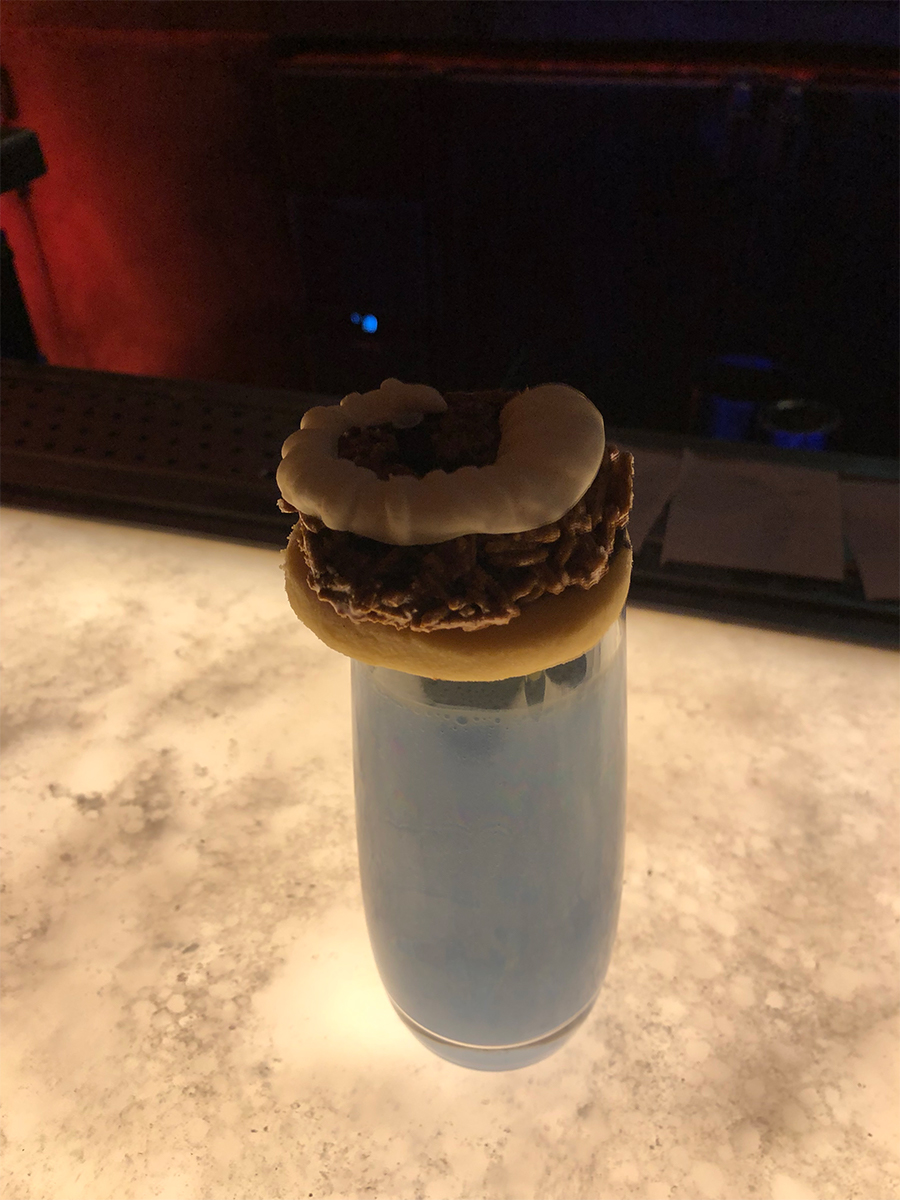 Yes, fellow faithful, Oga’s Cantina serves the iconic blue milk. The Blue Bantha is, well…it’s odd. It’s thick, like a mostly melted milkshake, but has an acidic finish. I didn’t hate it, but I wouldn’t order it. But let’s talk about the cookie. Imagine the topping of a chocolate chip pecan pie, piled on top of a crunchy, buttery shortbread cookie. It’s amazing. A great mix of sweet, salty, bitter and rich flavors. If they packaged those cookies, I’d buy them by the case.

I would love to go on, but our time was limited, and given the early hour, I didn’t want to imbibe too heavily. But I’m excited to go back some evening and try more things. I loved every single second of this experience. 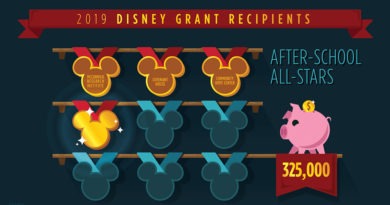