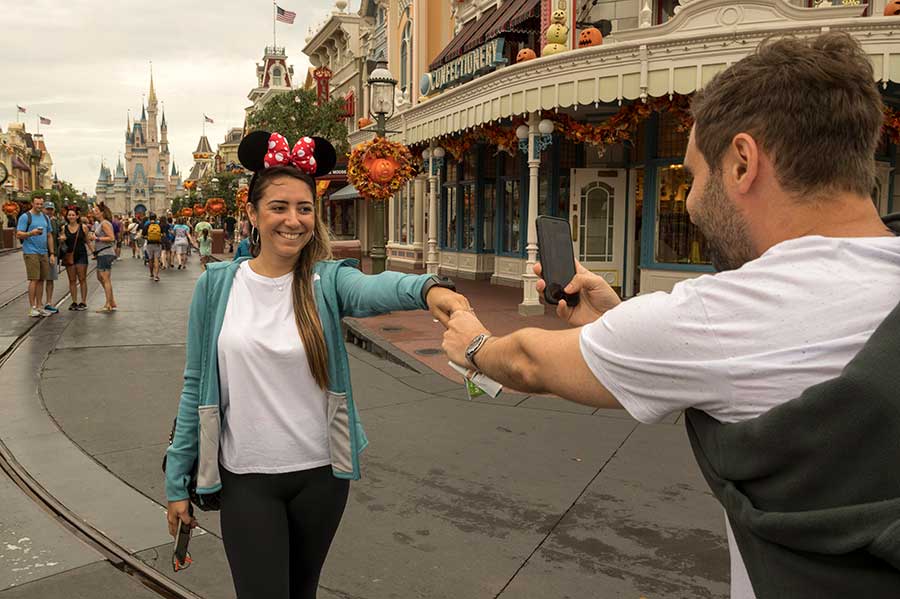 As Hurricane Dorian moved off to the north past Central Florida on Wednesday morning, guests began filtering back into Walt Disney World Resort theme parks like Bambi and Thumper after the rainstorm.

Disney cast members tirelessly prepared the entire resort in the hours and days leading up to the hurricane, then worked overnight and early this morning to quickly restore the parks to their magical glory once the all-clear sounded. As the parks returned to normal operations today, friendly cast members were there ready to greet guests as they resumed their Walt Disney World vacations.

Disney photographer Kent Phillips was out in Magic Kingdom Park today to capture some fun and special moments of guests enjoying themselves in the wake of Dorian, like this Brazilian couple celebrating their recent engagement:

As was “Mickey’s Royal Friendship Faire” in front of Cinderella Castle, which made this mom and daughter very excited:

There was also some magic happening inside the castle, where this young girl received the royal treatment at Bibbidi Bobbidi Boutique:

This fall is a great time to visit Walt Disney World, with new and special experiences happening all across the resort, including:

• The new Star Wars: Galaxy’s Edge at Disney’s Hollywood Studios, where you can live your own Star Wars adventures.

• The 24thEpcot International Food & Wine Festival, a feast for foodies with tastes and sips from around the world, as well as the new “Epcot Forever” nighttime spectacular debuting Oct. 1.

For more information on these and other incredible Walt Disney World experiences, visit Disneyworld.com.