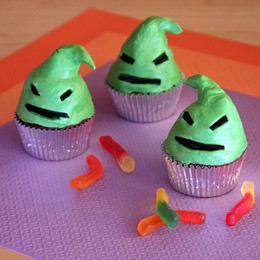 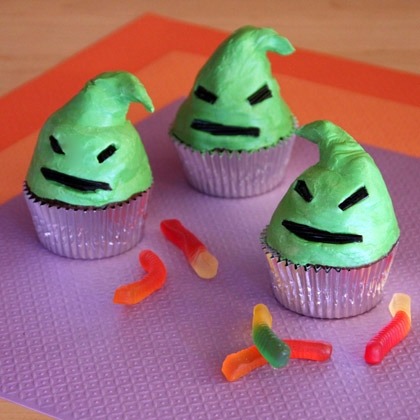 Halloween is getting closer, and we’re feeling the spooky spririt!  Today, we have a fun Halloween recipe that’s easy to do, and can bring you a little Disney Magic to boot!!   Oogie Boogie Cupcakes from The Nightmare Before Christmas!  Popping up from his underground cupcake lair, this bug-eating Halloween Town villain tastes way sweeter than he looks — particularly when served with a few candy worms on the side.

1. Frost the cupcakes with a thin layer of icing.

2. Place a half marshmallow on the center of each frosted cupcake.

3. Cut off the tip of the plastic decorating bag so that the opening is about 3/4-inch wide. Then fill the bag with green frosting (not too full or the frosting will come out the top when you squeeze it).

4. Working with one cupcake at a time, pipe frosting around the base of the marshmallow and then up and over it, moving toward the center and ending with a large peak.

5. Smooth the surface of the frosting with a butter knife, periodically dipping the tip of the knife in water so the icing will be easier to spread. Don’t worry about making it perfectly smooth — it will look even more like Oogie Boogie with a few lumps and “wrinkles.”

6. Snip a pair of narrow licorice eyes and a wide licorice mouth for each cupcake. Use the tip of a toothpick to gently press the candy pieces into the frosting face, angling the eyes a bit to resemble Oogie Boogie’s.

Recipe and photo from Disney Family