While creating the Star Wars: Galaxy’s Edge five-issue comic book miniseries, writer Ethan Sacks and artist Will Sliney found themselves living in a world that didn’t exist yet, but one they also knew they would visit some day. Now, they’ve done that – walked through Black Spire Outpost at Disney’s Hollywood Studios in Florida – the same settlement featured in their comic book.

Both Ethan and Will grew up as Star Wars fans, so working on this newest chapter of Star Wars saga is a dream. One of Ethan’s first memories is watching A New Hope in a Times Square theater at age four with his dad. “For me to play in this world is amazing,” Ethan says.

As a young artist, Will was always drawing new ships and new lightsabers and putting familiar characters on new planets. As an adult, Will still doing just that.

In the Star Wars: Galaxy’s Edge comic book, readers see Han Solo and Chewbacca pulled to Black Spire Outpost by a job for Dok-Ondar, proprietor of rare antiquities. All five issues are collected in a new trade paperback that hits bookstores on October 22.

While visiting, Will and Ethan made sure to visit Dok-Ondar’s Den of Antiquities, a location featured in the comic book as well. Among the mysterious and unique galactic artifacts in the shop are the Sword of Khashyun and a baby sarlacc, both important in the comic book.

While in the Den of Antiquities, Will also took the opportunity to draw Dok-Ondar on his tablet. Here’s a couple videos of Ethan’s and Will’s walk around Black Spire Outpost and a time-lapse of Will’s portrait. 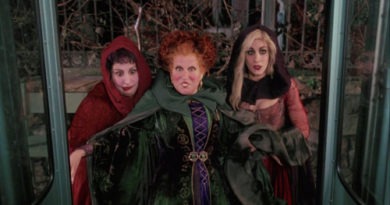 D23 Fantastic Worlds Celebration: EPCOT and the Magic of Possibility