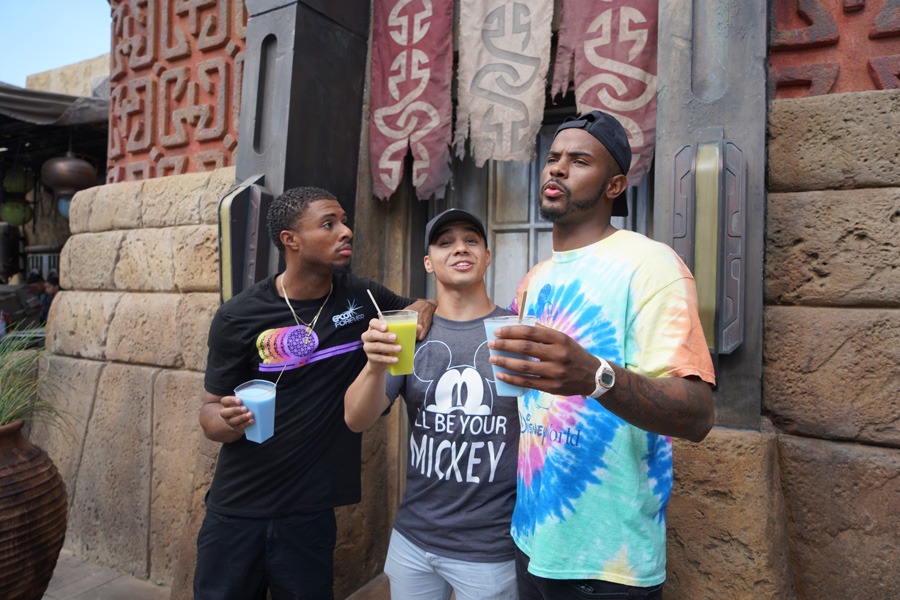 Trevor Jackson, Diggy Simmons, and Jordan Buhat took a break from shooting the upcoming season of Freeform’s ‘grown-ish’ to take a trip to the Walt Disney World Resort. From epic excitement at Disney’s Hollywood Studios to culinary adventures at Epcot’s International Food & Wine Festival, they each found their #HappyPlace.

The guys started their day at Disney’s Hollywood Studios aboard a haunted elevator-style lift on The Twilight Zone Tower of Terror, then hopped aboard Slinky Dog Dash in Toy Story Land. They snapped a few pictures in front of the Popsicle Wall before venturing to a Star Wars: Galaxy’s Edge for a thrilling adventure on Millennium Falcon: Smugglers Run.  They even earned enough credits to buy a round of Blue Milk!

The fun continued at Epcot’s International Food & Wine Festival, where the guys met up with chef Jet Tila for the Delicious Duo culinary demonstration. They then made their way around World Showcase making stops at the festival attractions and marketplaces including the Eat to the Beat concert, the new Appleseed Orchard marketplace, and Soarin’ Around the World.

The most exciting parts of the day were those
devoted to Epcot’s past, present, and future. The guys got an enticing glimpse
into the park’s bright future via the 360-degree presentation in the Epcot
Experience. They also snapped a few pictures in the photo cubes.

At the end of the evening, Trevor, Diggy, and Jordan were thrilled to watch “Epcot Forever“, the brand new nighttime fireworks spectacular. It’s safe to say that Walt Disney World Resort is their #HappypPlace.

We can’t wait for the return of ‘grown-ish’ in early 2020
on Freeform!