This holiday season, ABC and Disney Channel will transport the magic of Disney Parks and Disney Cruise Line during the holidays to viewers with three magical specials featuring star-studded performances, merry entertainment and more. During the specials, viewers will get exclusive looks at upcoming Disney Parks attractions, including Star Wars: Rise of the Resistance, opening soon at Star Wars: Galaxy’s Edge at both Walt Disney World Resort in Florida and Disneyland Resort in California.

“The Wonderful World of Disney: Magical Holiday Celebration”kicks off the holiday seasonThursday, Nov. 28, from 8:00-10:00 p.m. EST, on ABC and on the ABC app. Join hosts artistMatthew Morrison, singer-songwriter and TV host Emma Bunton, and TV hostJesse Palmer as they present the two-hour prime-time special on Thanksgiving night from Cinderella Castle at Walt Disney World Resort in Florida and Sleeping Beauty Castle at Disneyland Resort in California. This magical celebration will feature celebrity musical performances among a flurry of Disney holiday entertainment. During the prime-time special, viewers will be treated to several Disney Parks sneak peeks, including a behind-the-scenes look into Star Wars: Rise of the Resistance, opening in Star Wars: Galaxy’s Edge on Dec. 5, 2019, at Disney’s Hollywood Studios in Florida and Jan. 17, 2020, at Disneyland Park in California.

The holiday specials are a collaboration by Disney Parks, ABC, Disney Channel and Endeavor Content.

ABC Entertainment airs compelling programming across all day parts, including “Grey’s Anatomy,” the longest-running medical drama in prime-time television; riveting dramas “The Good Doctor,” “How to Get Away with Murder,” “A Million Little Things” and “Station 19”; the Emmy® Award-winning “Modern Family” and trailblazing comedy favorites “American Housewife,” “black-ish,” “Bless This Mess,” “The Conners,” “The Goldbergs,” and “Schooled”; the popular “Summer Fun & Games” programming block, including “Card Sharks,” “Celebrity Family Feud,” “Holey Moley” and “Press Your Luck”; star-making sensation “American Idol”; reality phenomenon “Shark Tank”; “The Bachelor” franchise; long-running hits “Dancing with the Stars” and “America’s Funniest Home Videos”; “General Hospital,” which has aired for more than 55 years on the network; and late-night talk show “Jimmy Kimmel Live!”; as well as the critically acclaimed hit special ”Live in Front of a Studio Audience: Norman Lear’s ‘All in the Family’ and ‘The Jeffersons.’” The network also boasts some of television’s most prestigious awards shows, including “The Oscars®,” “The CMA Awards” and the “American Music Awards.”

ABC programming can also be viewed on ABC.com, the ABC app and Hulu.

Disney Channel is a 24-hour kid-driven, family-inclusivetelevision network that taps into the world of kids and families through original series, movies andshort-form. Currently available on basic cable and satellite in over 88 million U.S. homes and to millions of other viewers on Disney Channels around the world. Disney Channel-branded content spans television, online, mobile, VOD platforms and the DisneyNOW app. There are 46 Disney Channels available in 33 languages worldwide.

About Disney Parks, Experiences, and Products

Disney Parks, Experiences and Products brings the magic of The Walt Disney Company’s powerful brands and franchises—including Disney, Pixar, Marvel, Star Wars, ESPN, 20th Century Fox and National Geographic—into the daily lives of families and fans around the world to create magical memories that last a lifetime. When Walt Disney opened Disneyland in Anaheim, California, on July 17, 1955, he created a unique destination built around storytelling and immersive experiences, ushering in a new era of family entertainment. More than 60 years later, Disney has grown into one of the world’s leading providers of family travel and leisure experiences, with iconic businesses including six resort destinations with 12 theme parks and 52 resorts in the United States, Europe and Asia with approximately 160,000 cast members; a top-rated cruise line with four ships and plans for three more to be completed in 2021, 2022 and 2023; a luxurious family beach resort in Hawai‘i; a popular vacation ownership program; and an award-winning guided family adventure business. Disney’s global consumer products operations include the world’s leading licensing business; one of the world’s largest children’s publishing brands; one of the world’s largest licensors of games across platforms; more than 300 Disney store locations around the world; and the shopDisney e-commerce platform. These experiences are created by Disney Imagineers, the creative force behind experiences found in Disney theme parks, resort hotels, cruise ships and consumer products—including books, games and merchandise.

*COPYRIGHT ©2019 Disney Enterprises, Inc. All photography is copyrighted material and is for editorial use only. Images are not to be archived, altered, duplicated, resold, retransmitted or used for any other purposes without written permission of Disney Parks/ABC. Images are distributed to the press in order to publicize current programming. Any other usage must be licensed. Photos posted for Web use must be at the low resolution of 72dpi, no larger than 2×3 in size. 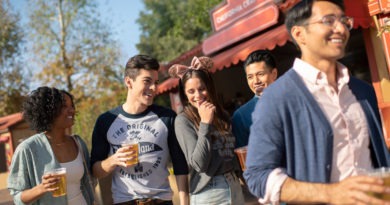