Disney+ Lifts Off, Ushering in a New Era of Entertainment from The Walt Disney Company #DisneyPlus 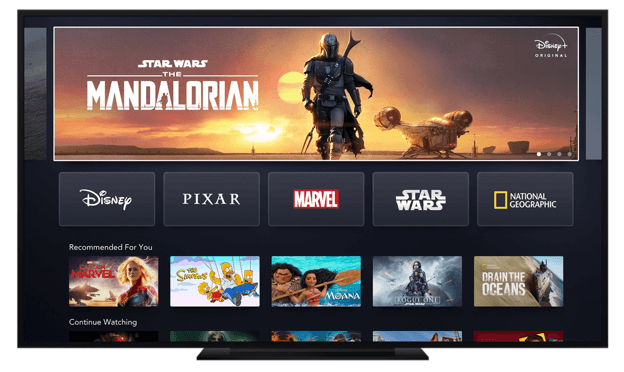 Disney+ Lifts Off, Ushering in a New Era of Entertainment from The Walt Disney Company #DisneyPlus

BURBANK, Calif. (Nov. 12, 2019) — Disney+, the highly anticipated streaming service from The Walt Disney Company, launched today in the U.S., Canada, and The Netherlands. With nearly 500 films and 7,500 episodes of television from Disney, Pixar, Marvel, Star Wars, National Geographic, and more, Disney+ is the exclusive home for some of the world’s most beloved stories as well as a robust slate of original content ready to be discovered.

“The launch of Disney+ is a historic moment for our company that marks a new era of innovation and creativity,” said Robert A. Iger, Chairman and Chief Executive Officer, The Walt Disney Company. “Disney+ provides an exceptional entertainment experience, showcasing our library of beloved movies, TV series and exclusive original content from Disney, Pixar, Marvel, Star Wars and National Geographic.”

Beginning November 15, most new episodes of each series will premiere on Fridays at 12:01 AM PT.

The Past, Present, and Future of Storytelling
The service provides viewers of all ages an unrivaled collection of new and library content from the world-class creators of The Walt Disney Company – the visionaries representing nearly a century of creativity from Disney, Pixar, Marvel, Star Wars, National Geographic, and more.

● Timeless animated films from Walt Disney Animation Studios’ Walt Disney Signature Collection, created or inspired by the imagination and legacy of Walt Disney – including “Snow White and the Seven Dwarfs,” “Beauty and the Beast,” “Pinocchio,” “Bambi,” “The Lion King,” “Lady and The Tramp,” “Peter Pan,” “The Little Mermaid,” “Cinderella” and more.

● Three of the four highest-grossing films of all time: “Avengers: Endgame,” Avatar,” and “Star Wars: The Force Awakens.”

● Thirty seasons of the 11-time Emmy Award-winning series “The Simpsons.”

● Thousands of episodes from hit Disney Channel and Disney Junior series such as “The Suite Life of Zack & Cody,” “Kim Possible,” “Mickey Mouse Clubhouse,” “PJ Masks,” and “Jake and the Never Land Pirates” along with more than 100 Disney Channel Original Movies including “Descendants,” “High School Musical,” and “Camp Rock.”

● 18 of Pixar Animation Studios’ groundbreaking fan favorite movies including “Wall-E,” “Up,” “Monsters Inc.,” “Finding Nemo,” “The Incredibles,” “Toy Story,” “Inside Out” and “Brave,” as well as all of Pixar’s beloved theatrical shorts such as the Academy Award-winning “Bao” and “Sanjay’s Super Team.”

● Over 400 hours of content from National Geographic, including the critically-acclaimed and award-winning documentary “Free Solo” and the streaming debut of “Science Fair.”

● All six of the original classic Star Wars films released between 1977-1999, in addition to recent blockbusters “Star Wars: The Force Awakens” and “Rogue One: A Star Wars Story.” By the end of 2020, the entire Skywalker saga will be available on the service.

● Marvel television series from the 1970s to present day including “X-Men,” “Spider-Man,” and “Marvel’s Runaways.”

Subscribers will also have access to a burgeoning collection of 4K Ultra HD films including the first seven Star Wars movies available for the first time in this format, along with “Hocus Pocus,” “Who Framed Roger Rabbit,” “Toy Story” 1-3, and more.

Disney+ offers subscribers high-quality and commercial-free viewing, up to four concurrent streams, unlimited downloads on up to ten devices, personalized recommendations, and the ability to set up to seven different profiles. Additionally, parents have the ability to set Kids Profiles that create an easy -to-navigate interface to access age-appropriate content.

Consumers can subscribe to Disney+ directly at DisneyPlus.com or via in-app purchase from the following partner platforms and devices (dependent on country):

For a full list of supported devices visit here.

Amazing Entertainment, Amazing Value
For one low monthly (or annual) fee, Disney+ offers consumers of all ages a compelling entertainment offering and an amazing price-to-value proposition.

Starting today, consumers in the U.S. also have the opportunity to purchase a Disney bundle featuring Disney+, Hulu (with ads), and ESPN+ for $12.99 per month, providing access to all of the Disney+ programming plus thousands of live sporting events, sports-themed original series and award-winning sports documentaries from ESPN+; as well as Hulu’s award-winning original content and on-demand streaming.

About Disney+
Disney+ is the dedicated streaming home for movies and shows from Disney, Pixar, Marvel, Star Wars, National Geographic, and more, together, for the first time. From The Walt Disney Company’s Direct-to-Consumer and International segment, Disney+ is available on any internet-connected screen and offers commercial-free programming with a variety of original feature-length films, documentaries, live-action and animated series and short-form content including series “The Mandalorian,” “High School Musical: The Musical: The Series,” “The World According to Jeff Goldblum,” and “Encore!” and films “Lady and the Tramp” and “Noelle.” Alongside unprecedented access to Disney’s incredible library of film and television entertainment and 30 seasons of “The Simpsons,” the service is the exclusive streaming home for films released by The Walt Disney Studios in 2019 and beyond, including “Captain Marvel,” “Avengers: Endgame,” “Aladdin,” “Toy Story 4,” “The Lion King,” “Maleficent: Mistress of Evil,” “Frozen 2,”and “Star Wars: The Rise of Skywalker.” Visit DisneyPlus.com to subscribe and/or learn more about the service.