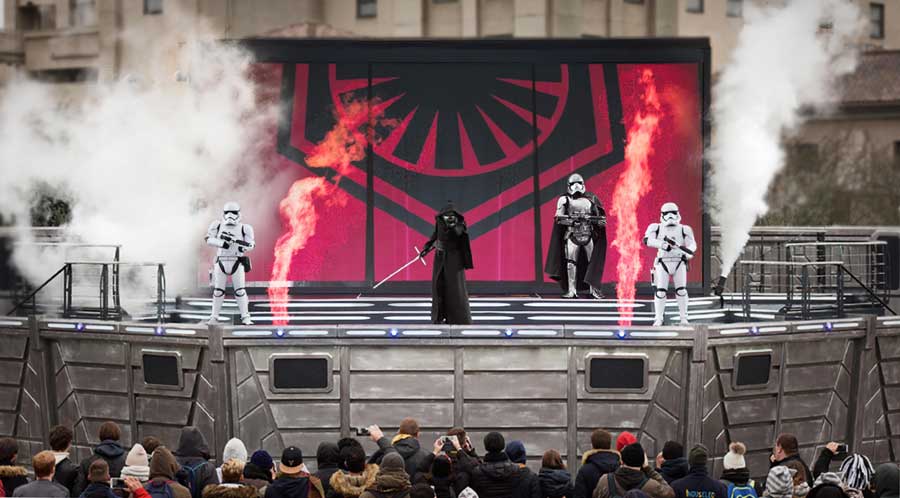 In just a few weeks, guests at Disneyland Paris can experience big-screen adventure in real life with two unmissable celebrations: Frozen Celebration and Legends of the Force – A Celebration of Star Wars!

The return of Legends of the Force from January 11 to March 15 is a chance for Star Wars fans of all ages to immerse themselves in a galaxy far, far away just a few days after the release of “Star Wars: The Rise of Skywalker,” including a new sequence from the film added to Star Tours: The Adventures Continue.

Guests will experience two thrilling shows – “Legends of a Galaxy Far, Far Away” will take guests on a journey through the biggest moments of the Star Wars saga, while “Star Wars: A Galactic Celebration” is an homage to the Star Wars galaxy at nightfall with projections, special effects and heroes from the saga. There will also be an opportunity to meet your favorite heroes (and villains) including Rey, Chewbacca and Kylo Ren, as well as “The March of the First Order” with Captain Phasma and First Order Stormtroopers.

And with the premiere of the first-ever Frozen Celebration from January 11 to May 3, guests can enjoy this global phenomenon like never before. In addition to the new “Frozen: A Musical Invitation” show which recently opened at Animation Celebration in Walt Disney Studios Park, fans will spot a brand-new float inspired by “Frozen 2.” Soon to be the tallest float at Disneyland Paris, it will feature the silhouette of the mysterious Nokk, as well as Anna, Elsa, Olaf, Kristoff, Sven and dazzling dancers accompanied by the new music from the film.

Every night, guests can spot their favorite Frozen characters during the Disney Illuminations show, and on select nights – January 24, 27 and 29 – guests can end the day in spectacular fashion with “Magic Over Lake Disney: The Frozen Edition” and relive amazing, iconic scenes from both films.

During both celebrations, guests will discover unique merchandise collections and playful “EATertainment” treats themed to iconic elements from Frozen and Star Wars inside the parks, at Disney Village and in Disney hotel shops.

There’s so much to do and see at Disneyland Paris in 2020! As always, keep your eyes on the Disney Parks Blog for all the latest news and planning tips.