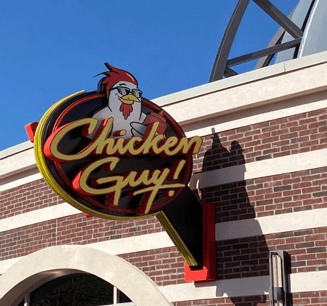 When you think of Disney you don’t really think of fast food. Thinking quick service or restaurants, then yes. With the exception of McDonald’s there really are not any fast-food chains on property. Downtown Disney used to have a McDonalds but that was removed as the transition began to Disney Springs. However, if you wander from the bus depot or even the Orange Garage toward Planet Hollywood you will discover underneath that restaurant a gem called Chicken Guy! Founded by the celebrity chef Guy Fieri and Robert Earl this first location opened in August 2018.

Upon opening the lines began and really have never ceased. This is a popular stop with good food, served hot, and served fast. The popularity has grown and there are now 3 locations. Another in Miami, one in California, and one in Maryland. More are on the way across the United States. 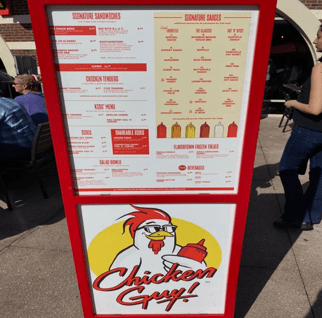 Taking a look at their menu board you can see an offering of Signature Sandwiches (5), two options on tenders, salad bowls and sides. What makes Chicken Guy! unique is the fact that everything is based on their chicken tenders. These are special tenders that are “pounded out” to increase the texture and flavor. I was told that they are marinated in a special mixture and specially seasoned. Either on sandwiches, individually or in a salad they can be served either fried or grilled (which is a great healthy option). I typically get the three tender combos grilled with a side of fries. Even the fries are specially seasoned. A cast member friend of mine loves their Mac Daddy Mac ‘N’ Cheese. Even though aside it is more than enough for a meal. Their loaded fries with chicken, melted cheese, bacon, and onions is also worth sharing!!!

Finally, you need to know about their Signature Sauces. When ordering tenders, you get a choice of two of their special sauces with extras being only .50 each. Chicken Guy! offers 3 types of Sauces. There is the “Guy! Favorites”, “The Classics” and “Hot an Spicy”. With a total of 22 different sauces, the choices are amazing. My favorites from each category are Avocado Crema #17, Bourbon Brown Sugar BBQ #8 and Chipotle Ranch #3.

As mentioned the chicken items can be ordered grilled and gluten-free (including the buns) for healthy eating options. Next time you are at the “Springs” make this a stop. Even if you see a line they move people along very quickly. With inside and exterior seating there is room enough for everyone. Of course, you can grab some tenders to go as an option. Hope you like it!