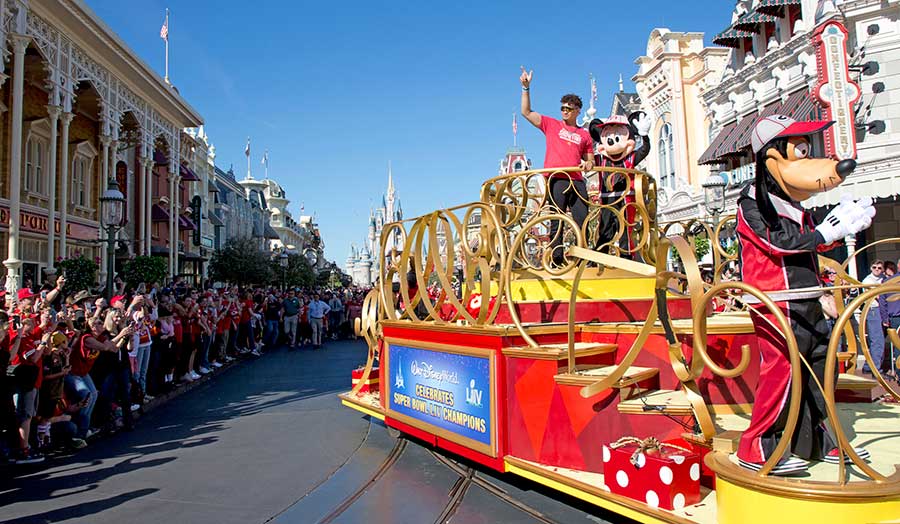 Mere hours after leading the Kansas City Chiefs to a dramatic victory in Super Bowl LIV, MVP Patrick Mahomes on Monday was whisked away to Walt Disney World Resort in Florida for a celebratory day full of magical moments for the star quarterback and his fans.

Mahomes was the star of a parade down Main Street, U.S.A. in Magic Kingdom Park where he thanked Chiefs fans for their support – whether they were lining the route or watching from home. With confetti bursting overhead, he waved to cheering fans alongside Mickey Mouse.

Joining Mahomes on this adventure was a 10-year-old Make-A-Wish child from Texas named Nathaniel, who participated in the parade as part of his dream-come-true day. Nathaniel also traveled to a galaxy far, far away with Mahomes, experiencing the groundbreaking new attraction Star Wars: Rise of the Resistance inside Star Wars: Galaxy’s Edge at Disney’s Hollywood Studios.

In addition to Nathaniel, 17 other Make-A-Wish children whose wishes were to attend the Super Bowl extended their magical wishes by visiting Magic Kingdom Park today. They got to spend time with Mahomes, shaking hands with the superstar and getting special footballs courtesy of the MVP.

The inclusion of Make-A-Wish in Disney’s Super Bowl campaign this year is an extension of Disney’s commitment to deliver comfort and inspiration to children facing serious illnesses. That commitment also includes the just-announced Disney Parks donation of $1 million to Make-A-Wish in honor of Mahomes as part of Disney Parks’ designation as presenting sponsor of the Super Bowl MVP ceremony. Currently, Disney helps grant more than 10,000 wishes each year for children around the world.