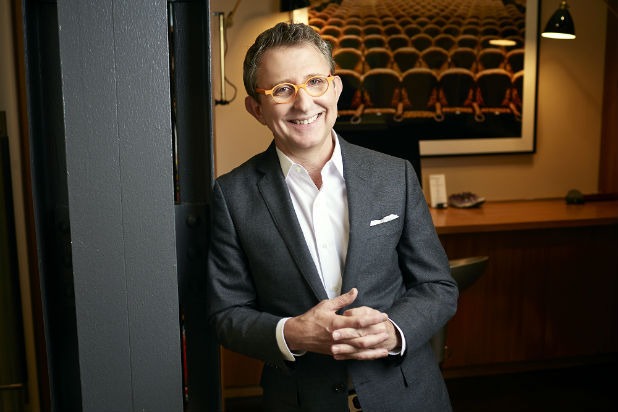 Magical music is in the spotlight! Get swept away by the songs you love. Sit back and enjoy the beloved show-stopping numbers from legendary Disney musicals. Every two weeks, we’ll welcome different pairs of Disney stage stars to the Disney on Broadway Concert Series, to perform some of the songs they helped make famous—plus other sensational tunes. Performances are at 5:30 p.m., 6:45 p.m. and 8:00 p.m. daily until February 24, 2020.

“Nothing has ever brought me more joy than the time I have spent working on a play or a musical—or a piece of entertainment of any kind,” said Thomas Schumacher, who recently celebrated his 30th year with The Walt Disney Company, and is producer and president of Disney Theatrical Productions.

There was a time, though, only 25 years ago, when Disney and Broadway did not exist together. Disney stage shows were performed in arenas, inside the Disney Parks, or as one-off “spectaculars” in famous venues such as Radio City Music Hall.

In the intervening quarter-century, the Broadway stage has seen a series of popular and acclaimed Disney productions of “The Lion King,” “Mary Poppins” (a co-production with Cameron Mackintosh), “Newsies,” “Aladdin,” and many more; which have transformed the way audiences experience these beloved stories—and theatergoing in general.

“Frozen,” which was nominated for a 2018 Tony Award for Best Musical, began its North American Tour at the Hollywood Pantages Theatre on December 4. Tom recalls, “Frozen was crazy, because I had nothing to do with the movie. My friends at animation said, ‘You should see this.’ So at midnight, we screened it in a Disney screening room while I was working on Aladdin in Toronto. I was so captivated, immediately I saw that it was a stage musical. That’s really because of the way [composers] Bobby [Lopez] and Kristen [Anderson-Lopez] shaped the music. I literally from the theater called California and said, ‘When do we start?’”

“Frozen” and other Disney Theatrical productions tour the world, bringing live entertainment events to a global annual audience of more than 20 million people in more than 50 countries—and have brought countless millions the joy of theatre.

Tom takes a special joy in further expanding this theatrical reach by bringing Disney on Broadway and its ever-increasing family of stage stars to the Epcot International Festival of the Arts each season. “The Epcot audience is a sort of microcosm of our worldwide audience,’ Tom says. “A variety of ages and backgrounds coming together from all over the place, in a space and a style that is uniquely ‘Disney’—but at the heart of it all, it this universal and human experience of Theatre.

“’Theatre’ is a big concept,” Tom says, “It is magic, it is drama, it is music. It is dance, it is beauty, it is heartbreak.  It is a place where nothing is real and yet to me, it has always meant a place where everything is possible. And absolutely real. Real in my heart.”

This lifelong love of theatre led Tom in 2007 to write the classic Disney Editions book How Does the Show Go On? An Introduction to the Theater, which has just been reissued in a completely revised and updated Third Edition.

“I’ve kind of done everything in the theatre in one way or another, and wanted to write about it. I wanted to write the book that I wanted as a kid. When I was young there wasn’t really any kind of accessible ‘primer’ on the fundamentals of theatre. So with my friend Jeff Kurtti, I wrote one.”

This edition includes never-before-seen photos and personal stories from the making of Disney’s latest hit Broadway musical, and the addition of hit shows such as “Newsies” and “Aladdin,” but it also features an incredible new “augmented reality” component. “By scanning a code found sprinkled throughout the book,” Tom explains, “you can use the free Disney Scan app and open fun, related video content right on your mobile device. It’s enabled us to explain and enhance and deepen the information in the book and the celebration of the too-often-invisible people who are all part of making these richly collaborative works.

“And my favorite part of my job is really the period of creation. In our business—different from other parts of the entertainment industry—we get to be together. If you make a movie, you’re separated into your process. But we’re all in the room together. That to me is so thrilling. It’s the people.