Sharing a frosted treat with actor John Ratzenberger at Pixar Pier was 12-year-old Spencer’s greatest wish. On Jan. 28, Make-A-Wish and the Disneyland Resort made that wish come true.

When asked why he wanted to meet Ratzenberger, Spencer said, “He’s my hero. He’s funny and he sounds like such a nice guy. He’s in every Pixar movie and I love that. I feel happy when I watch him.”

Spencer visited the resort with his family from Maryland on Jan. 28. He brought one of his favorite plush toys along for the fun, which was the Abominable Snowman from Disney and Pixar’s “Monsters Inc.,” Spencer’s favorite character who is voiced by Ratzenberger.

Spencer is so happy that his friends from Make-A-Wish were able to make his wish come true.

“I just can’t believe it,” he said. “I sure did enjoy being with him, and he called me a friend. Being his friend is so nice, and it made my heart shine brighter than ever!”

In 2019, Disneyland Resort made nearly 700 wishes come true for children with life-threatening medical conditions. The Disneyland Resort is thrilled to continue its partnership with Make-A-Wish in celebrating the organization’s 40th anniversary this year in the place where it all began, the Happiest Place on Earth! 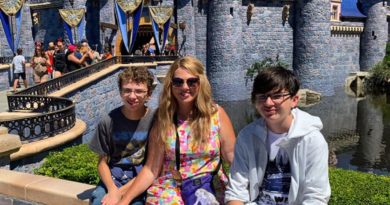 Disney Reading-Soaking In The Magic!