Magic Kingdom Park: Home to the Most Romantic Fairytale of All-Time 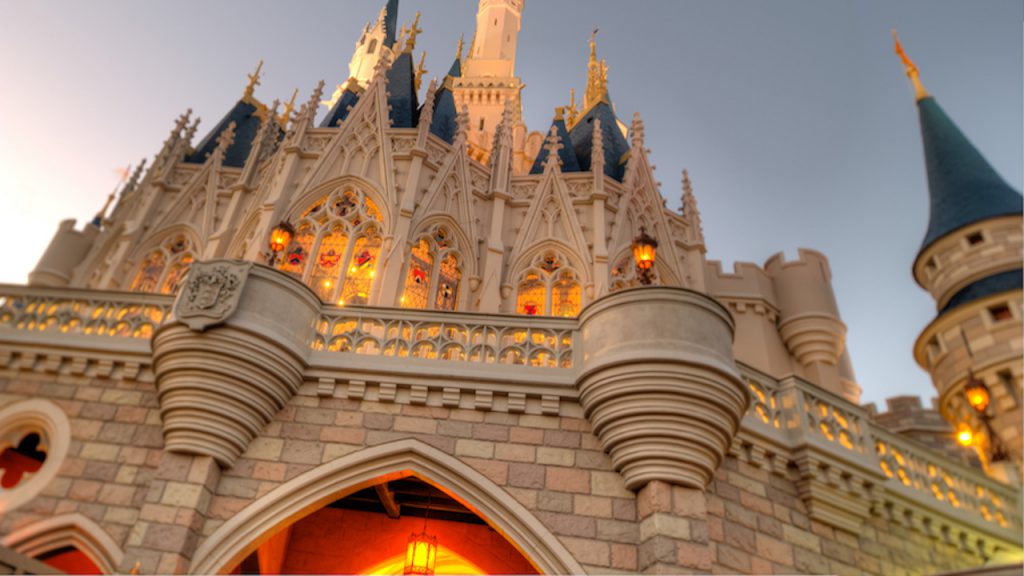 Magic Kingdom Park: Home to the Most Romantic Fairytale of All-Time

From the Disney Parks Blog and written by: Tim O’Day

On a recent visit to Magic Kingdom Park at Walt Disney World Resort I found myself taking a breather in the Plaza Hub. It was dusk, or as photographers and romantics like to call it, “The magic hour.” On this particular evening that moniker definitely lived up to its promise.

As I sat there watching the fading sunlight paint the white puffy clouds to hues of pink, and the Florida sky to deep shades of royal blue it all seemed appropriate, for before me was the elegant and regal visage of Cinderella Castle. Slowly as the last rays of sunshine said “Goodnight” the castle seemed to magically transform into a shimmering beacon of romance, hope and joy. It was truly a breathtaking moment and similar to one I’m sure many of you have enjoyed through the years.

As night officially fell around me, I kept staring at the castle, cognizant of the “oohs” and “ahhs” of my fellow park guests as they too took in the sight with their handy cell phones and cameras. While they busily captured the moment, I started to think about the seemingly everlasting allure of “Cinderella” and how Magic Kingdom Park is home to the greatest romantic fairytale of all-time.

By many accounts “Cinderella” is the most well-known, translated, and interpreted fairytale in the world. Although originating in 16thcentury German literature it is the 1697 interpretation by French poet Charles Perrault that forms the basis of most modern representations of the “Cinderella” story, particularly Walt Disney’s classic 1950 animated feature (celebrating its 70thanniversary on Feb. 15, 2020, and currently featured on Disney+) and Disney’s hit 2015 live-action film adaptation.

While gazing at the castle I pondered: Cinderella and her story possibly holds the distinction of being represented more within Magic Kingdom Park than any other Disney Princess is represented at any other Disney park in the world. Here a just a few of the charming nods to the world’s most famous romantic fairytale heroine to be found within Magic Kingdom Park (and so appropriate to recall in this season of St. Valentine’s Day):

Cinderella Castle– This globally recognized icon soars 189 feet into the heavens and features the exclusive and exquisite Cinderella Castle Suite. The mind boggles at the countless expressions of adoring affection that have been captured in photographs with Cinderella Castle as the backdrop.

Cinderella’s Wishing Well– This romantic locale is a favorite spot for wedding proposals. Maybe one of you got engaged here? It’s also a reflective spot for kindness and positive thoughts. Monies from this wishing well are donated to charity and “help the dreams of children come true.”

La Fontaine de Cendrillion– A bronze sculpture of the famed scullery maid (crafted by Disney Legend Blaine Gibson in 1965, six years prior to the opening of the Magic Kingdom in 1971) is the centerpiece of a quaint fountain in the courtyard of the castle.

Bibbidi Bobbidi Boutique– If your little ones are seeking magical makeovers, look no farther! This popular spot is where girls and boys experience a royal head-to-toe transformation through the skilled magic of their Fairy Godmothers-in-Training, emerging as delightful regal princesses or brave knights.

Prince Charming Regal Carrousel– This 100-year old majestic, swirling, centerpiece of Fantasyland features 90 unique, wood-carved, horses. Built in 1917 and debuting as the Liberty Carrousel at Belle Isle Park in Detroit, Michigan, this particular attraction opened with the Magic Kingdom in 1971.

Cinderella’s Royal Table – Do you recall (As kids or young-at-heart adults) the fun and anticipation of entering the grand Banquet Hall, with its incredible stained-glass views of Fantasyland, colorful heraldry and dining with Cinderella herself? For many, this popular restaurant remains a favorite memory-making destination at Walt Disney World Resort.

Princess Fairytale Hall– “Once upon a times” really do come true in this resplendent setting for royal encounters. Here Cinderella and her fellow Disney Princesses grant delightful audiences with their fans of both young and old alike.

So, as you can see, with so many loving nods throughout Fantasyland, it’s easy to see the charm and romance that “Cinderella” represents living on, happily ever after, in Magic Kingdom Park.