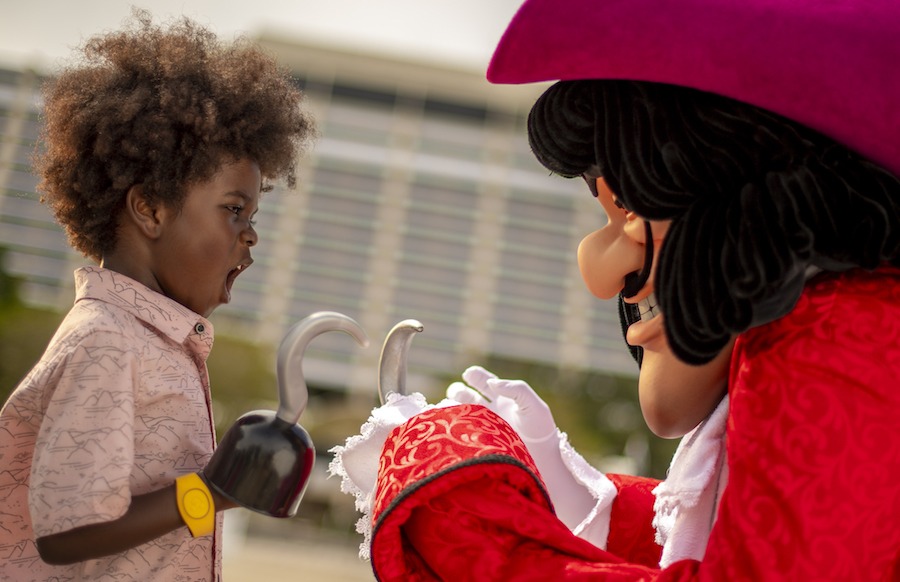 From the Disney Parks Blog and written by: Michelle Baumann

My godson loved pirates when he was a tot. He would dress up as Captain Hook – red-feathered hat, tall boots, and menacing hook – during trips to the grocery store, the playground and of course when he explored Disney theme parks. He was also engrossed in the fantastic tales of Captain Jack Sparrow and his scallywags. I think most youngsters are intrigued by the mysterious, and sometimes unsavory pirate scene.  Whether it’s embarking on a quest for hidden treasure, sailing the seas or singing along with rogue pirates, there’s plenty of pirate-themed ventures for little ones throughout the Vacation Kingdom. Here are just a couple of ways “to get your pirate on” at Walt Disney World Resort.

Pirates of the Caribbean – Families are swept away into a pirate’s world on this iconic Magic Kingdom Park adventure. Little ones will love the sailing voyage that includes an encounter with Black Beard, a pirate raid with villainous Captain Barbossa and Captain Jack Sparrow, and more during this scenic peek into 17th century pirate life. And good luck trying to  get “Yo Ho, Yo Ho a pirate’s life for me” unstuck from your mind. The nearby Adventureland gift shop features all sorts of swords, eye patches, gems and countless treasures sure to engage your little one.

Captain Hook’s Pirate Crew – Shiver me timbers. Captain Hook is looking for new recruits at a treasure seeking, high-energy sailing escapade at Disney’s Beach Club Resort. Parents can drop off their little one (ages 4 and up) and they can learn all about being a buccaneer on the high seas. Kids will learn pirate lingo, solve puzzles and gather clues on land before cruising around Crescent Lake on a quest for some pirate booty. The fun-filled evening culminates with a feast fit for pirate. It’s an ideal option for parents looking for a way to entertain their youngsters while they are on a date night at Disney.

Pirate Rooms – There’s even sea-worthy quarters fit for swashbucklers at Disney’s Caribbean Beach Resort. These special pirate rooms decked out with nautical accents, furniture crafted from crates and barrels, and authentic ship-themed beds will surely delight me hearties! If you want to amp it up even more, there’s a pirate themed in-room celebration where Captain Jack leaves clues leading to a treasure chest overflowing with pirate-themed goodies.

And don’t forget you can spot Captain Hook and Mr. Smee during the daily “Festival of Fantasy Parade” that winds thru Magic Kingdom Park. So depending on your little ones interest in plundering pirates, there are lots of ways to enjoy the pirate’s life at Walt Disney World Resort.