“Magic Happens,” the all-new parade now swirling through Disneyland park, celebrates the awe-inspiring moments of magic that are at the heart of so many Disney stories.

While the stories and music featured in “Magic Happens” are rooted in iconic Disney lore, the soundtrack is heavily influenced by today’s pop culture, putting a contemporary spin on the classic Disney hits. “Magic Happens” features an energetic musical score and new songs, co-composed by singer-songwriter, Todrick Hall. Learn more about the creative musical process in the video below:

“This is a full circle moment for me,” said Todrick, who began his career at Walt Disney World Resort in Florida as a performer in ‘Beauty and the Beast – Live on Stage.’ “I learned how to dance from watching Disney parades, so the fact that I am getting to create the music that these iconic Disney characters are going to be performing to is pretty much the most epic thing that has happened to me in my life!”

For another behind-the-scenes peek with Todrick, check our recording session video on the Disney Parks Blog here.

Hope you get out to the Disneyland Resort to see this incredibly dazzling parade! 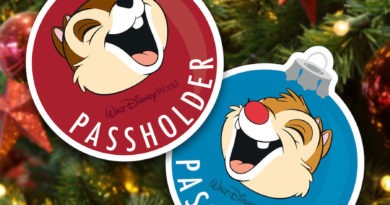 Sneak Peek: Annual Passholders Can Pick Up A Chip ‘n’ Dale Magnet Set at Epcot International Festival of the Holidays

Exclusive: Mickey and Friends Are Inspiring Friends to Plan a Staycation With Their Stay True Crew With Sensational Six-Inspired City Guides