I am sure that we are all aware of the ‘behind the scenes” experiences that Disney offers. Each park has their own special tours that are bound to delight the Disney aficionados. One tour at the Animal Kingdom Park is called “Savor the Savanna and I truly recommend taking the time to do this. It is a premium tour that costs $169 per person. However, I found the money well spent on a special evening.

The tour itself is a semi-private tour through the savannah with your own guide. The vehicles are a little different from the regular ride vehicles and occupancy is based on how many bookings there are. The maximum is twelve, but we had a group of six which made it very intimate. I had heard complaints that the vehicles are rougher than the usual vehicle, but I found it no different than riding in a jeep. You check in right by the Kilimanjaro Safari ride and are escorted backstage to a loading area. For those that love those backstage peeks you are right there in an employee-only area. After loading you are taken right into the Harambe Reserve. At the beginning, you are right on the regular ride route as your guide will take the time to share facts and stories. Our group was interested in the care of the animals which they took the time to fully explain to us. They are there for you and are glad to answer any questions. We even pulled off of the route in a Giraffe area for some private viewing. 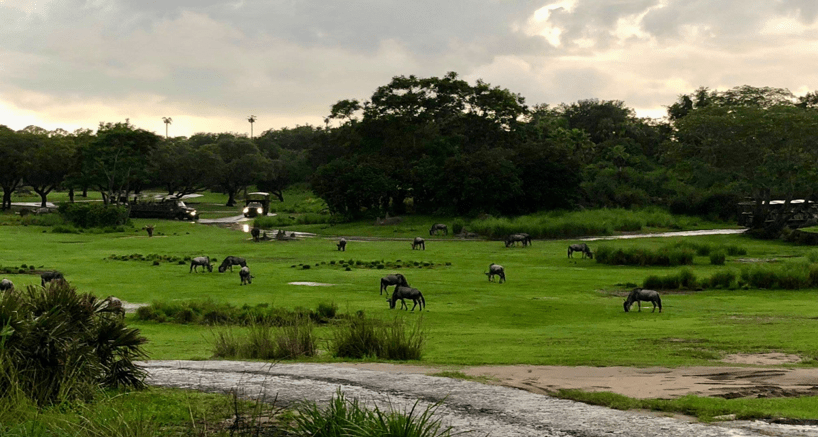 Once we entered the western part of the savannah, we took a detour to the Boma. This is the platform that you typically see over to the right as you leave the elephant area. It is a viewing platform that is used for various tours and has two bathrooms. As we pulled up our hosts/hostesses met us to begin the ‘savor” part of the tour. You have nice tables to sit at and view the savannah. Again, the guides are there to answer questions and give you all the information you could want. While you are sitting and relaxing there is a great buffet of African cuisine along with beers, wines, water and juice. Typically called “little plates” there were grapes, cheese, prosciutto, edamame, nuts and different desserts. 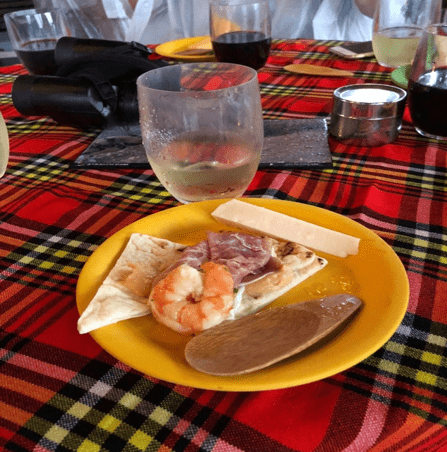 I can’t begin to describe sitting down, relaxing with some nice wine and watching the animals stroll around the savannah. So relaxing and different from the hustle of the parks. You get to spend an hour at the Boma before continuing on the safari. As the tour restarts, you continue back on the regular tour path to the end of the Safari. Overall, I think the experience was about 2.5-3 hours long. Even though it was drizzling on the night we went it was quite the experience. At the end, you are given a keepsake to take home as a special memory of your tour. Reservations can be made online or even right at the park. Typical restrictions and warnings apply. Sometimes special discounts are offered so make sure you keep your eyes out for those. 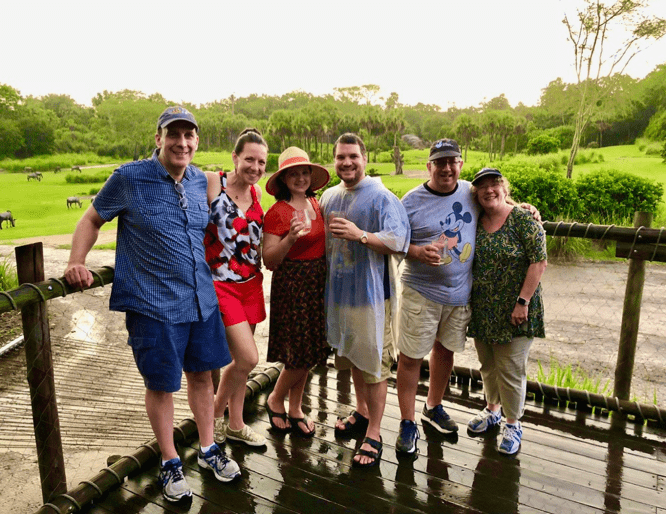