Cruising (and Streaming) with Kermit 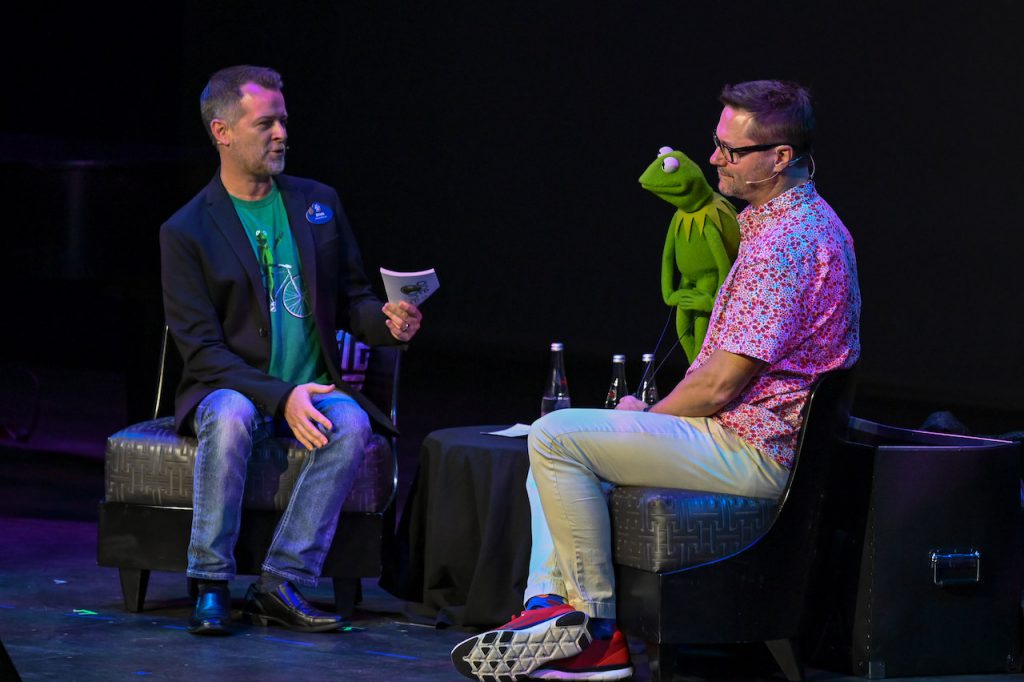 Cruising (and Streaming) with Kermit

With the Disney+ Original Series “Muppets Now” set to stream its highly anticipated first episode on July 31, I received special permission from our friends at the Muppets Studio to share with you a little clip of Kermit the Frog discussing the show with me on stage last October aboard the Disney Vacation Club Member Cruise.

Part of what made this special presentation in the Disney Magic ship’s Walt Disney Theatre so cool was the rare opportunity it presented for the audience to see Muppets and their human performer together on stage. That human was the extraordinarily talented Matt Vogel, who in addition to performing with Kermit during our show, performed with the Electric Mayhem’s Floyd (who spoke of his love for the “it’s a small world” attraction, saying “It’s a prayer for peace, man!”), the boomerang-fish-slinging Lew Zealand (who threw fish into the crowd) and the ghastly Uncle Deadly (who performed lyrics from the Haunted Mansion anthem “Grim-Grinning Ghosts” as spoken-word poetry).

Thanks to live tight shots from our camera crew on screens flanking the stage, Members in attendance saw Muppets on Walt Disney Theatre screens just as they’d appear on TV or cinema screens, while simultaneously seeing their human Muppet performer working his magic on stage. It was like being on the set of an actual Muppets Studio production (if said production was in the middle of the ocean).

In this fun clip from our show, Kermit gives Disney Vacation Club Members a sneak peek at “Muppets Now,” which was in the earliest stages of production when we sailed. You’ll see that he runs into a little trouble with the studio’s legal department, proving once again that stars are just like us.

As Kermit has become a good personal friend since our cruise (a fact that delights my inner child to no end), I asked him to introduce the clip in this video.

For another inside look at “Muppets Now” before it starts streaming, here’s the video call during which Kermit shared the good news with the gang that Disney+ had given their series the green light. (Watch out for more meddling by their “legal weasel.”)