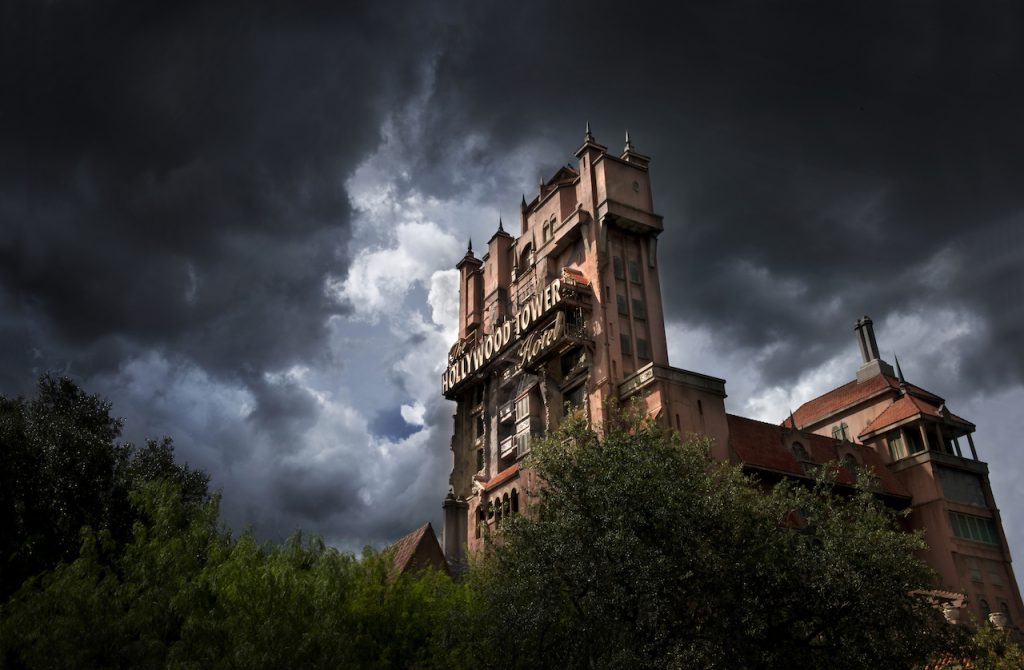 From the Disney Parks Blog and written by: Kent Phillips

Tasked with creating a new signature image of The Twilight Zone Tower of Terror at Disney’s Hollywood Studios, I wanted a shot that conveyed a feeling of foreboding, just like the iconic attraction itself. I already had a spooky nighttime shot I liked, but needed a daytime shot, as well (always good to have options, you know).

It’s hard to make something look creepy on a sunny day, so the natural inclination is to wait for a cloudy afternoon, right? The trouble is, normally on a cloudy day the dark hue of the tower wouldn’t contrast enough against the sky. I basically needed the impossible: a bright, sunlit tower and a dark, creepy sky.

Anybody who’s experienced summer in Central Florida knows the area can be prone to near-daily “sea breeze” thunderstorms that pop up in the afternoons, as winds from both coasts meet in the middle of the state. It means you can be in the middle of a thunderstorm half a mile from someone else who is enjoying a sunny afternoon, and vice versa.

The Twilight Zone Tower of Terror catches nice sunlight in the afternoons based on its perfect positioning at the end of Sunset Boulevard, and I found the angle I wanted by standing on a nearby rooftop. The secret to getting my impossible shot was watching the radar every afternoon and waiting until one of these cells passed just to the north of the park with dramatic clouds.

Catching that exact scenario was easier said than done. More than half a dozen times over three weeks I drove to Disney’s Hollywood Studios when conditions looked promising, only to have the clouds shade the tower, break up and disappear, or pour buckets of water on my head, instead. Finally, the heavens took pity on me and all my necessary conditions lined up, with dramatic clouds behind a beautiful sunlit tower. The resulting image you see here perfectly captures the dimension of sight I was going for.

Ready to take your picture-taking skills to the next level? Head over to the Disney Youth Programs Kahoot! page to learn photography concepts used by Disney photographers!