Disney’s Halloween Festival has returned to Disneyland Paris with exclusive “selfie spots”  – a new way of interacting with your favorite Disney friends!  From now until November 1, Mickey Mouse, Minnie Mouse, Donald, Goofy, Pluto and others are dressed in their most wickedly colorful Halloween fashions to share some special not-so-spooky moments with visiting guests.

In the heart of Fantasyland, the Meet Mickey Mouse theatre is decorated in the colors of the season, welcoming guests of all ages to take an unforgettable selfie with Mickey and friends.

During this year’s Festival, popular Disney villains, including Maleficent, Ursula and Captain Hook are also taking over some iconic park locations.  Even villains like Jafar and Cruella de Vil are invading Studio Theatre at Walt Disney Studios Park to strike frightfully fun poses with guests.

The bravest guests can discover – or rediscover  – Disneyland Paris’ spookiest attractions as well. They can shriek in The Twilight Zone Tower of Terror at Walt Disney Studios Park, seated in the elevator of the infamous Hollywood Tower Hotel, facing 13-story freefalls and enjoy other surprises.

At Disneyland Park, guests are invited to join spirits and ghouls who enjoy nothing more than feasting and dancing in the dining room of Phantom Manor, nestled in a dark corner of Frontierland.

For the entire season, Disneyland Park is decorated in its most spooktacular Halloween decor from Main Street, U.S.A., to Sleeping Beauty Castle and beyond.  And in Frontierland, there’s a colourful Mexican-inspired festival complete with lively music and prancing skeletons.

This year’s celebration also includes enchanting sweet and savory flavors shaped like Disney villains and Halloween-themed merchandise at shops throughout the Resort.

As you can see, Halloween is being celebrated at Disneyland Paris with a witch’s hatful of surprises to discover. Even Disney Village has been taken over by pumpkins and ghosts!

Also, did you know?

• 13,262 flowers make up the new garlands from Halloween to Frontierland.

• 175 meters of giant light strings illuminate the road to Frontierland.

• 3-meter-tall female “Catrinas” skeletons inspired by Mexican culture are highlighted in the decorations. 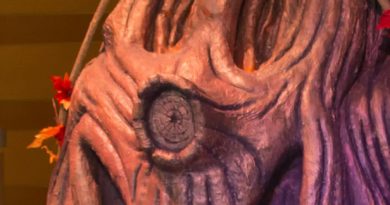 #Halfway2Halloween: Where Can You ‘Sea’ It?