Whether you’re a fan of spine-tingling stories, chilling tales of ghosts, or mischievous bedtime reads, Disney Publishing Worldwide has a book for trick-or-treaters of every age.

The 8 titles on Disney’s Spooky Reads List feature eerie illustrations, haunting mysteries, and a few spell-binding tales from on-screen movie classics. Young readers join Mickey and friends on Halloween night in “Ready for Halloween!,” or venture into “Tales from the Haunted Mansion: The Fearsome Foursome,” the first volume in a series of creepy stories based on the beloved Disney Parks attraction.

Have you ever wondered what it would be like to come face-to-face with the Sanderson sisters? “Hocus Pocus & the All-New Sequel” takes place 25 years after Max and Allison Dennison save Salem from these sinister witches. If you need a reminder of the original story, celebrate #DisneyPlusHallowstream and tune-in to “Hocus Pocus” on Disney+ starting October 8.

Encounter another frightful villain in Evil Thing, Cruella de Vil’s untold story of darkness, or a new shadowy figure in “Disney Chills: Fiends on the Other Side.” If you can’t get enough of Cruella de Vil, follow her son Carlos and other evil offspring by tuning-in to “The Descendants” on Disney+.

For those brave enough to hear some real-life facts about strange phenomena, monsters from the deep, and unexplained disappearances, dig into National Geographic’s “Don’t Read This Book Before Bed.” Or you might learn some trivia to impress your friends during your next sleepover in Weird But True: Halloween: did you know there is an underwater pumpkin carving contest?

After the kids go to bed, parents can get creative in the whimsically grim world of “Art of Coloring: Tim Burton’s Nightmare Before Christmas.” Get ready to meet ghouls, ghosts and goblins under your favorite blanket with a flashlight — pick your poison!

For the perfect way to keep your place while casting a complicated spell, or reading one of the books on our list, kids can print, color, and fold their own with inspired bookmarks. And as you curl up in your comfiest chair to read, don’t forget to show us how Disney, Pixar, Star Wars, Marvel, or 20th Century are inspiring your Halloween at home for a chance to win a special prize pack. To enter, follow @DisneyProducts and tag your photos #DisneyHalloMoments and #sweepstakes on Instagram. 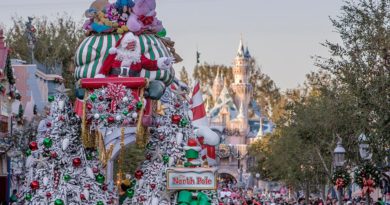 Time to Celebrate! The Holidays Begin Today at Disneyland Resort