“Hocus Pocus” fans–get ready to RUN AMUCK! Bette Midler, an original star from the beloved Halloween Disney film “Hocus Pocus,” has confirmed all three of the Sanderson sisters (including Midler, Kathy Najimy, and Sarah Jessica Parker) will all be returning for a “Hocus Pocus” sequel that will premiere on Disney+!

The news comes officially from a recent interview Midler had with Fox 5 New York’s morning show “Good Day New York.” Midler told the Fox affiliate, “They want to make a movie, they’ve asked us if we were interested and of course all of us said yes…I’m game, I’m totally game.”

Your 3 fav witches – @SJP @KathyNajimy & ME – are reuniting for 1 night only on 10/30 at 8p ET! “In Search of the Sanderson Sisters” is the best thing to happen to #Halloween since Hocus Pocus + Reeses Pieces. Get your tix now and support @NYRP https://t.co/tkyfXpKjKb pic.twitter.com/s2CBVZC3h0

This reunion film won’t be the first time the original trio have returned to resurrect the mischievous Sanderson sisters since the film’s premiere back in 1993. The three stars are already set to reprise their roles as the witches for “In Search of the Sanderson Sisters,” a 1-night live-stream put together by Bette Midler’s New York Restoration Project. The stream, which is taking place October 30 at 8 p.m., will benefit the cause, which restores parks, community gardens, and open spaces throughout New York city.

When speaking about her recent return to the character for NYRP, Midler said that it was “so bizarre to have been these characters 27 years ago.”

She continued: ““And to put all that gear on… it was so bizarre because we fell into exactly the same relationship we had and the same style of behaving on the screen that we had 27 years ago…As if we had been off for a weekend!”

At this time, it is not known when the sequel film will be released on Disney+. It seems this announcement is in its very early stages as this news has not been confirmed by Disney just yet. However, it’s not a surprise as Disney recently announced it would be undergoing a company-wide restructure that will set its focuses on streaming.

What are your thoughts on the Sanderson sisters reuniting for a sequel film? let us know in the comments! 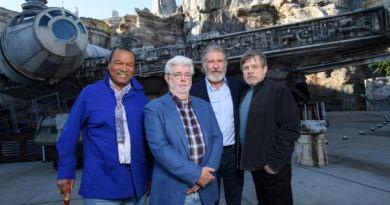 Frozen: A Musical Invitation According to Imagineers Matt Walker and Yaron Spiwak