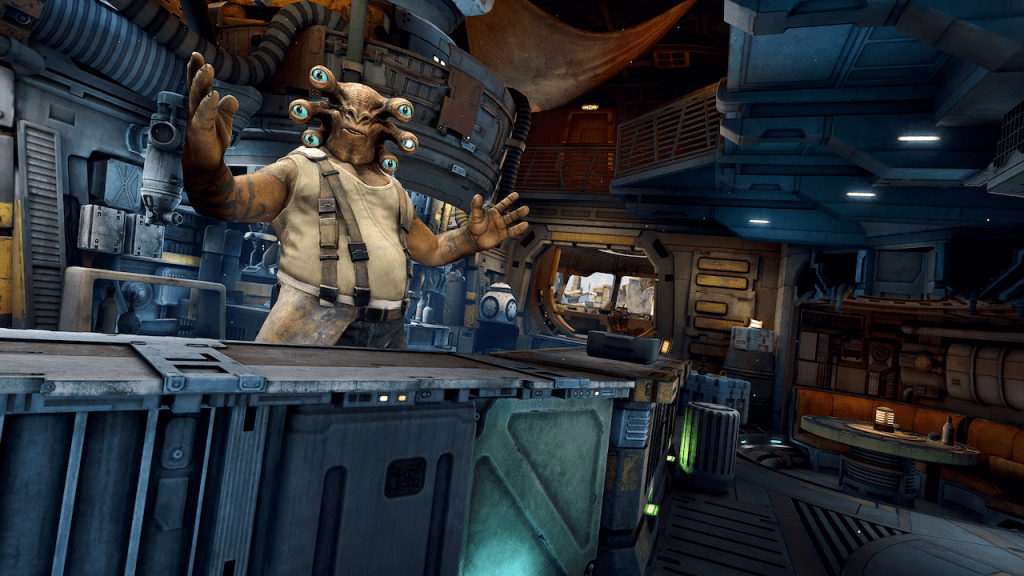 Have you ever wanted to explore the planet of Batuu beyond what you’ve seen at Star Wars: Galaxy’s Edge? Well now, you can! ILMxLAB, Lucasfilm’s award-winning immersive entertainment studio, has just released their latest virtual reality adventure, Star Wars: Tales from the Galaxy’s Edge. The new experience, created in collaboration with Oculus Studios, is available now on the Oculus Quest platform.

Star Wars: Tales from the Galaxy’s Edge takes place on the outskirts of Black Spire Outpost on the planet of Batuu, as depicted in Star Wars: Galaxy’s Edge, the immersive epic lands at Disneyland Resort in California and Walt Disney World Resort in Florida. Players take on the role of a droid repair technician operating near Batuu, but when a group of Guavian Death Gang pirates attack they’ll be forced to jettison the ship’s mysterious cargo and head for the escape pods. After crashing on the planet, players will discover never-before-revealed areas of Batuu, and discover that anyone in the galaxy can become a hero.

“Star Wars: Tales from the Galaxy’s Edge is a dream project for all of us at ILMxLAB,” said director Jose Perez III. “Building off the groundbreaking work for Star Wars: Galaxy’s Edge, our team worked tirelessly to expand the story of Black Spire Outpost. We are excited for fans to have the opportunity to battle evil space pirates, explore Batuu, engage with iconic characters, or just hang out in Seezelslak’s cantina and play a relaxing game of Repulsor Darts.”

Tales from the Galaxy’s Edge also features Temple of Darkness, an anthological VR story set hundreds of years before the events of Star Wars: The Phantom Menace. Thanks to Seezelslak’s storytelling skills, players will step into the role of Jedi Padawan Ady Sun’Zee (Ellie Araiza) and work alongside Jedi Master Yoda (Frank Oz) to confront the darkness that now lurks within a Jedi Temple  — and within herself.