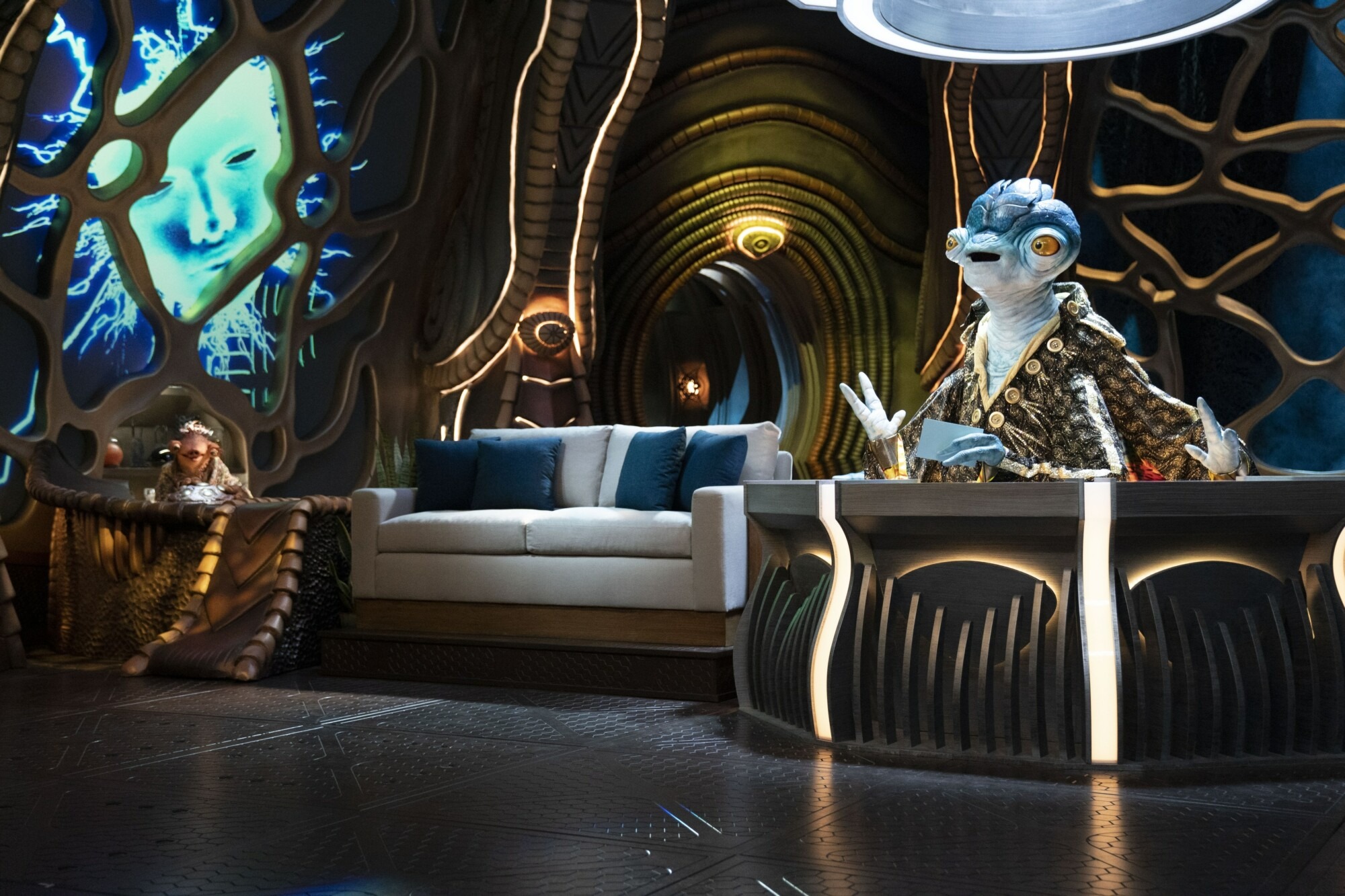 January is only a few weeks away, which means it’s time to start preparing your watchlist for the new year! Here’s a guide to every title coming to Disney+ throughout the month of January!

Dr. Seuss’ Horton Hears a Who!

After premiering in September, “Earth to Ned” is back to kick off the new year with 10 all new episodes!

From the Jim Henson Company comes a late-night talk show hosted by alien commander Ned and his lieutenant Cornelius, who call off the invasion of Earth after they fall in love with human culture. Broadcasting from the bridge of their spaceship, hidden deep underground, Ned and Cornelius interview Earth’s greatest resource, celebrities. With the help of the ship’s artificial intelligence, BETI, and the destructive CLODs, Ned must keep his show a secret from his home planet or suffer the wrath of his father, the Admiral of the Galactic Fleet.

Episode 12: “The Neddies”
Obsessed with winning an award, Ned hosts his own awards show, with D’Arcy Carden and Oliver Hudson. Cornelius is beamed to the surface to take an acting class. The CLODs make a Western.

Episode 13: “Trancendental Neditation”
When Ned gets stressed out, Yvette Nicole Brown and Jack McBrayer try to teach him how to relax. Cornelius is beamed to a “rage room.” Ned is troubled by a message from his home planet.

Episode 15: “Alien vs. Nedator”
When Ned hears aliens may have built the pyramids, he investigates human conspiracy theories with Sherri Shepherd and Penn & Teller. Cornelius goes undercover as a human to find out what Earthlings really think about aliens.

Episode 17: “Ned vs. Food”
After Ned catches Cornelius snacking after bedtime, Chef Roy Choi and Brenda Song help him become a foodie. The CLODs open their own restaurant, with disgusting results.

Episode 18: “CyberNedics”
When BETI crashes, Ned’s interviews with Mayim Bialik and Margaret Cho are disrupted by glitches and blue ooze. Cornelius is trapped at the Intergalactic Whiz Desk.

Episode 19: “Growing Up Ned”
When one of Ned’s CLODs runs away, Molly Ringwald and Chris Colfer try to explain “growing up.” Cornelius goes in search of the missing CLOD, and unexpectedly meets Grace VanderWaal.

Episode 20: “Like Father Like Ned”
With Ned’s dad on his way to Earth, Jason Ritter and Tig Notaro try to help prove humanity should be saved, and teach Ned about the true meaning of family. Cornelius makes a decision that may change his life. The secret origin of the CLODs is revealed.

Extras – Beyond the Clouds: A Firm Handshake
Justin discusses integrating music from Zach and Sammy’s album, “A Firm Handshake,” into the film. The choice is made to record the singing live on set to capture the raw emotion of the film, but the decision comes with challenges for production. Justin invites Sammy to contribute a song of her own for the final track in the film, and she looks for inspiration in her relationship with Zach.

Extras – Beyond the Clouds: The Anatomy of Emotion
Justin discusses the process of navigating the emotion of the film and the challenge of ensuring the tone remains true to Zach’s story. Fin taps into a difficult personal struggle to reach Zach’s low point, and Justin shares how the classic film, That Thing You Do, mixed with the casting of Tom Everett Scott, inspired one of the most joyful moments in Clouds.

Marvel Studios: Legends Premiere
“Marvel Studios: Legends” serves as an exciting refresher for the various heroes and villains making their way to the highly anticipated streaming shows premiering on Disney+, setting the stage for the upcoming adventures. The first two episodes will feature Wanda Maximoff and Vision.

WandaVision Premiere
“WandaVision” is a blend of classic television and the Marvel Cinematic Universe in which Wanda Maximoff (Elizabeth Olsen) and Vision (Paul Bettany)—two super-powered beings living idealized suburban lives—begin to suspect that everything is not as it seems. The new series is directed by Matt Shakman; Jac Schaeffer is head writer.

Extras – Beyond the Clouds: The Concert of a Lifetime
As Justin and the crew prepare for Zach’s final performance, they have difficulty finding a venue. A miracle, however, comes from the most unlikely place – Justin’s daughter, Maiya. Jason Mraz, reflects on his connection with Zach’s music and its impact on him and his work. When filming the final scene, Justin invites Zach’s family and friends to be in the audience, and they all sing along in his honor.

WandaVision – New Episode
“WandaVision” is a blend of classic television and the Marvel Cinematic Universe in which Wanda Maximoff (Elizabeth Olsen) and Vision (Paul Bettany)—two super-powered beings living idealized suburban lives—begin to suspect that everything is not as it seems. The new series is directed by Matt Shakman; Jac Schaeffer is head writer.

Extras – Beyond the Clouds: The Finishing Touches
Justin brings in composer Brian Tyler to score the film. Brian looks to Zach for inspiration as he creates a theme that he feels Zach himself would’ve written. Brian composes a beautiful suite of music for Zach, feeling as though Zach is with him every stop of the way. Stefan Sonnenfeld, the colorist, details the process of creating a uniquely grounded and raw look for Clouds. When Covid-19 closes theaters, Justin decides to meet the audience where they are – in their living rooms.

WandaVision – New Episode
“WandaVision” is a blend of classic television and the Marvel Cinematic Universe in which Wanda Maximoff (Elizabeth Olsen) and Vision (Paul Bettany)—two super-powered beings living idealized suburban lives—begin to suspect that everything is not as it seems. The new series is directed by Matt Shakman; Jac Schaeffer is head writer.

Extras – Beyond the Clouds: A Promise Kept Finale
The cast and crew reunite at the annual Clouds Choir fundraiser, singing in unity to honor Zach and raise money for the Zach Sobiech osteosarcoma fund. In tearful confessionals, various cast members, crew, and important people in Zach’s life share how he inspired them to live more fully and thank him for his lasting impact. Lastly, Justin proudly reveals that after the release of Clouds, Zach’s song is again #1 on iTunes.

With nearly 300 hours of the world’s longest running scripted primetime sitcom, Disney+ is the ultimate streaming home for “The Simpsons.” Here’s a few of our favorites to watch this January:

Jan. 15 “WandaVision” on Disney+ / “Bart the Bad Guy” (Season 31, Episode 14)
When Bart sees the superhero movie of the summer before anyone else, he uses his “spoiler powers” to blackmail the town… but will it cost him his soul?

Jan. 29 “Dinosaurs” on Disney+ / “Black Widower” (Season 3, Episode 20)
Sideshow Bob reappears, apparently reformed, and wishes to marry Marge’s sister, Selma. Bart is convinced that his old nemesis is up to no good.

Look for a friendly parody of the prehistoric family.

Jan. 31 Music’s Biggest Night / “Homer’s Barbershop Quartet” (Season 5, Episode 1)
While at a flea market, the Simpsons discover an old barbershop quartet album starring Homer. Homer reveals that he was once a singer / songwriter for a popular group known as The Be Sharps, whose rise and fall eerily paralleled that of The Beatles.