Go era by era with the songwriting duo, following Wanda and Vision’s relationship through Westview.

WandaVision! It’s not just the name of the latest Marvel Studios series to arrive on Disney+; it’s also an incredibly catchy tune, and one you might have had stuck in your head for weeks now. Considering you can’t have a decade-spanning series without a few jingles here and there, now’s the perfect time to introduce theme music into the Marvel Cinematic Universe. And no better people to do it than songwriting duo Robert Lopez and Kristen Anderson-Lopez.

The award-winning team — Lopez is a double EGOT recipient, and Anderson-Lopez has two Oscars and two Grammys to her name — behind the likes of Frozen’s iconic “Let It Go,” were brought on to help pen the jingles for multiple episodes, channeling all sorts of different classic television styles over the years, from the 1950s right up through today. Never thought two Avengers would have theme songs, but that’s exactly what happens with WandaVision.

“I feel like [director Matt Shakman] reached out to us on a Friday afternoon. It was a no-brainer,” Anderson-Lopez tells Marvel.com, with Lopez adding, “I think we probably said ‘yes’ on that Friday.”

Surprisingly, joining WandaVision was a family affair for the duo, considering they already had connections to Shakman and head writer Jac Schaeffer. Lopez went to college with Shakman, while Schaeffer wrote Olaf’s Frozen Adventure, which Anderson-Lopez’s sister did the music for. The duo were game to jump right in.

“The first pitch was, ‘It’s Wanda and Vision in a bunch of TV shows! We need theme songs!’” Lopez explained. “And we were like, ‘yes.’

Soon, they had an idea and a theme running through every single song — literally, the word WandaVision.

As Anderson-Lopez explained, “In every single song, there’s that interval. The [singing] WandaVision is in every song hidden in some way. It’s this full major like, da, da, as an octave, and then, duh, na, is a tritone, which is a really unsettle— it’s called the devil’s interval. And that’s our way, our musical way, of saying what this series is. It’s this big swing, this big bright-colored swing while also being really unsettling and full of mystery.”

“I think since we had read the whole series before we started any of these songs, we knew the general conceit. And the first conversation we had was this is Wanda and she’s got these amazing powers. So yeah, each one of these theme songs is a different tone.”

Lopez and Anderson-Lopez break down the songs, era by era:

The opening few chords of “A Newlywed Couple” are the first things heard at the beginning of Episode 1, painting a quick picture of what Wanda and Vision are up to right now.

Anderson-Lopez: Each song sets up a conflict of these two people and their love—the combination of Wanda and Vision is always against something. There’s always a conflict. And some of them are bright and smiling. Some of them are like, [singing] how will this duo fit in and pull through, oh?

Consisting of only one word throughout — WandaVision! — this tune was super easy to create, and now near impossible to get out of your head.

Lopez: This was a slam dunk.
Anderson-Lopez: All you have to say is WandaVision.

EPISODE 3, “WE GOT SOMETHING COOKING”

By the time the duo reached Episode 3, more things were starting to come to light for Wanda and Vision and their live in Westview, which is reflected in the theme song. On the pregnancy aspects of the song, which was penned mostly by Anderson-Lopez:

Lopez: I thought that you had picked all of those words in number three because of pregnancy. I mean, it was like expectation, like “expectant” and “complication” are pregnancy words and “sudden surprises,” that’s a pregnancy word. I thought it was all about the baby’s coming.
Anderson-Lopez: “Some surprises come in all shapes and sizes.” It was setting up a complication of like, what’s happening here and then making it up as we go along. Also like it’s us versus the world.

EPISODE 5, “MAKING IT UP AS WE GO ALONG”

While Episode 4 doesn’t have any theme song, Episode 5 comes along with a 1980s power ballad, with Anderson-Lopez and Lopez pulling inspiration from their own lives to write.

Anderson-Lopez: Episode 5 was us channeling every 1980s rock singer and pop singer we could. So there’s a little bit of Jennifer Warnes in there, a little bit of Michael McDonald, and Kris Kristofferson, and Huey Lewis, and even Taylor Dayne. A little like— [singing] there will be days we won’t know which way to go.
Lopez: Part of what was so great [about 80s shows like] Punky Brewster and Growing Pains, those songs were so touchy-feely and ballad-like, and they were so long that we were able to afford ourselves a little more time and to really try and land the emotion of it because it agreed with the style that we were going for. And it felt a lot like the time of life that we’re in now. We have [children that are the same age as Wanda and Vision’s family], and we feel that way, that we’re crossing our fingers and just trying to make things work even as the world kind of crumbles around us. We’re keeping a force field around our family with love, and I think it was really easy to tap into that. And it was a song and style that we, kind of, wanted to write anyway.
Anderson-Lopez: So that’s the perspective we were resonating with, but those lyrics, the idea of like, [singing] when the going gets tough, when push comes to shove, we’re breaking it all. I hope it resonates with every family member out there dealing; every single day is tough. And you just gotta be like, OK, you can’t go to school, and I can’t go to work. Let’s make up how this goes.

On the opening line, “you wander the world with a vision of what life could be…”

For the first time, we hear a different voice in a WandaVision theme song, and it’s one that reflects the music scene of the decade.

Lopez: The one that changed the most was episode 106, which was the punk one. We went through three totally different lyrics on that.
Anderson-Lopez: So the original riot grrrl, Kathleen Hanna is the singer along with me. We’re sort of blended together. It’s a real punk [vibe] similar to a lot of the punk [scene]. Take Friends and Malcolm in the Middle. A bunch of punk theme songs were all happening in the ’90s. And [Kathleen] was the original creator of the riot grrrl sound. It was a real pleasure and privilege to get to work with her, though I’m sure it was a very strange experience for her. Because she’s used to just being able to, you know—
Lopez: Stick it to the man!
Anderson-Lopez: And here we were kind of being like, well, we have a certain thing we have to do here. But it was fun. But she really lends this incredible authenticity to that experience.
Anderson-Lopez: Yeah. And by that point, our songs tend to follow— we were, obviously, always responding to a script and trying to set the tone for each episode. And by this episode, things are starting to unravel, so it also has an element of chaos, and unraveling, and a feeling of, sort of, alienation, much like a lot of the music of the ’90s. The Kurt Cobain sound was everybody responding to civilization as we know it. It’s getting rough and dirty.

Keeping up with the trends of the time, all theme song lyrics were abandoned for Episode 7.

Anderson-Lopez: The song for the aughts doesn’t have lyrics because they had decided not to use songwriters anymore in Hollywood in the aughts. But if we had to put lyrics— I mean, you’ll feel it in the music. It’s a feeling of like things are just speeding up and out of control.

It was her all along 🐇 The seventh episode of Marvel Studios’ #WandaVision is now streaming on #DisneyPlus. pic.twitter.com/ThCKlYCfeR

Surprise! Wanda’s not the only one with theme songs anymore, as it’s revealed there’s someone else fighting for the limelight in Westview.

Anderson-Lopez: [Agatha] gets her own theme song that is in, sort of, The Munsters, Addams Family, kind of, witchy, ghoulish feeling.
Lopez: That’s the one that Kristen’s not on. I’m in the group of guys, the backup guys. But Kathryn [Hahn] takes the lead on that one. She was amazing.
Anderson-Lopez: It also has a little bit of an oompa loompa tenor feel to it too. We decided since we could hit any decade with that, we had to kind of take a couple swings at what would Agatha’s music be? But we ultimately decided the most fun is to just go right in with all of the—
Lopez: Monsters.
Anderson-Lopez: The monster, witch music we’ve seen before.
Lopez: Kathryn is a musical theater star. Kristen’s sister also works with her on Central Park, where she’s a main singing character. And we know, because of that, how amazing her voice is.
Anderson-Lopez: And she’s such a great sport. Just the half hour— wasn’t it a half hour that we worked with her, really? After that, I was like, we need to work with her again. Because she was just game [for anything], and she was like, [imitates witch] ha, ha, ha. 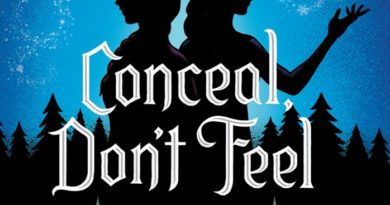 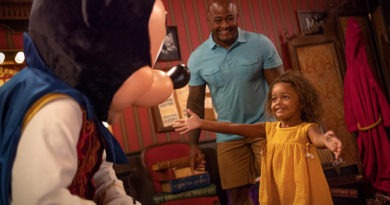 Who Will You Discover Disney With This Year?

Nothing Can Stop Them Now! Mickey & Minnie’s Runaway Railway Invites Guests into a Cartoon Adventure at Walt Disney World Resort

#DisneyCastLife: Cast Members and Their Families are in the Spotlight at the Opening of Mickey & Minnie’s Runaway Railway