Here’s a great little recipe from Disney Family! I thought it was really cute so I had to share! Bake up some magic… make Cogsworth Cupcakes~

Peach-colored frosting (Note: to make your own, simply stir 1 drop of red food coloring and 2 to 3 drops of yellow food coloring into 1 cup of butter cream frosting. This should be enough to frost 1/2 dozen cupcakes)

A pinch of confectioner’s sugar

Helpful Tip
Cutting should be done by an adult.

How To Make It

1 Frost the cupcake and set it aside while you create Cogsworth’s hair.

2 Microwave a Tootsie Roll Midgee for up to 6 seconds to slightly soften it. Then sandwich the candy between two pieces of waxed paper and use the rolling pin to flatten it to about 1/8 inch thickness. Use a knife to cut two 1/2- by 2-inch strips from the flattened candy.

3 Working with one strip at a time, use a toothpick to roll the ends in opposite directions.

4 Stick one end of an almond sliver into the top of the cupcake and then press the rolled Midgee strips in place on the sides of it.

5 For eyes, slice a mini marshmallow in half and sprinkle confectioner’s sugar on the sticky sides. Flatten both pieces with your thumb. Then press a chocolate chip, tip down, into the center of each. Press the eyes in place on the cupcake, leaving room to add eyebrows later.

6 For Cogsworth’s mouth, press a 2 3/4-inch length of red Twizzler candy into the frosting, forming a wide smile. Add short lengths of Twizzler to the ends of the mouth.

7 Use the black decorator’s frosting or gel to pipe on eyebrows. Next, pipe on clock hands that extend from the point where the nose will go to just below the mouth. For Cogsworth’s nose, press a Sweeties candy in place, covering the very tops of the clock hands. 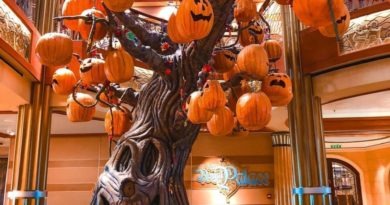 The Falcon and the Winter Soldier Is Coming To Disney+ on March 19, 2021