Experience Never-Before-Seen Bonus Footage and Deleted Scenes when Raya and the Last Dragon Releases on Digital April 2
and 4K Ultra HD™, Blu-ray™ and DVD May 18

Walt Disney Animation Studios’ new animated short, US AGAIN, previously only available in theaters, is available today on the digital release of RAYA AND THE LAST DRAGON.

In honor of the digital release, we have a brand new clip for you to check out below!

Walt Disney Animation Studios’ Raya and the Last Dragon Bonus Features*
• An Introduction to Us Again – Director Zach Parrish takes you behind the scenes of the Walt Disney Animation Studios short.
• Us Again – An elderly man and his young-at-heart wife rekindle their passion for life on one magical night.
• Taste of Raya – Dine along with Kelly Marie Tran and the film’s creative team–virtually–over a Southeast Asian menu inspired by the countries that influenced the film as they discuss their experiences creating the world of Kumandra.
• Raya: Bringing it Home – When the global pandemic of 2020 hit, production of Raya and the Last Dragon moved to the houses of over 450 people. We open a window into their lives and learn how they overcame massive obstacles to make an animated feature from home.
• Martial Artists – You’ll get a kick out of learning about the martial art forms and weapons used in the film as co-screenwriter Qui Nguyen and visual anthropologist Dr. S. Steve Arounsack share the inspiration behind the film’s action-packed elements.
• We are Kumandra – Meet members of the Southeast Asia Story Trust and discover the cultural influences that inspired the film…and how important this representation in a Disney animated film is to the people of the region.
• Outtakes – Step into the homes and behind the mics of the cast of Raya and the Last Dragon as they experience voice-over sessions in closets and shaky internet connections, which made recording this film unlike any other.
• Fun Facts & Easter Eggs – Take a look at some of the hidden surprises and behind-the-scenes secrets of Raya and the Last Dragon.
• The Story Behind the Storyboard with John Ripa – Co-Director John Ripa invites you to get an inside look at his thought process as he pitches a storyboard sequence from the film and talks about his amazing career with Disney Animation.
• Deleted Scenes
o Introduction – Head of Story Fawn Veerasunthorn introduces deleted scenes from Raya and the Last Dragon.
o The Bridge – Raya confronts an early version of the Druun in this deleted storyboard sequence.
o Escaping Namaari – See an early version sequence of an introduction to Namaari as an adult.
o Dragon Blade – Discover an early version of Raya’s sword, when it used to have magical powers.
o Meet Boun – Meet an early version of Boun before he was a chef and shrimp boat captain.
o The Heart of the Dragon – Co-Director John Ripa introduces a deleted scene which brought the theme of hope into the film. 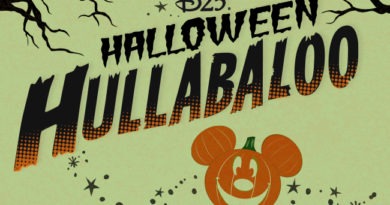 THE SPOOKY SEASON HAS ARRIVED WITH D23 HALLOWEEN HULLABALOO

The Transformation of Mickey’s Toontown at Disneyland Park Begins Soon