After a months-long absence, the three animatronics figures for the Three Caballeros—Donald, Panchito and Jose—have returned to Epcot’s Mexico pavilion.

What You Need To Know

The three figures were restored “from the ground up”

The were removed from The Gran Fiesta Tour in January

According to Riddley’s post, the Imagineering team restored the animatronics “from the ground up using the latest technology.” The updated figures were reinstalled at the attraction Tuesday night.

The three animatronics were removed from the final scene of the attraction in January, leaving many fans wondering where they went and when they would return. During their absence, the animatronic figures were temporarily replaced by 2D character cutouts.

Prior to their refurbishment, the animatronics had a number of technically issues. A video posted on Twitter last summer showed the Jose animatronic face-down in the final scene of the attraction. And earlier this year, the Donald Duck animatronic was seen leaning before being removed the following day and replaced with a plant with a sombrero on top.

The Three Caballeros animatronics have been around since Disney World’s early days. They were originally part of the opening day Magic Kingdom attraction Mickey Mouse Revue, which closed in 1980. The trio was then sent to Tokyo Disneyland in 1983, where they remained for 26 years. They eventually returned to Florida for the Gran Fiesta Tour in 2015. 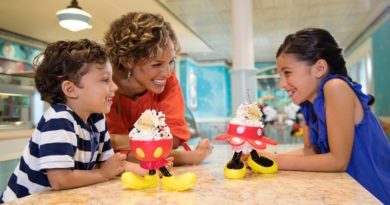 How to Treat Yourself on the Disney Fantasy

An Inside Look: What It’s Like to Perform on Main Street U.S.A with Disney Performing Arts