From the Walt Disney World News and written by: Kristyn Taylor

Summer weather is here bringing unpredictable rainy and humid days. Walking around a theme park may even sound unbearable. Along with sunscreen and other heat-protective items, be sure to bring water and hydrate constantly. If you forget your water bottle, you can always purchase one at the park or ask for a cup of water at a food location. While you’re thinking about these options, you may also consider a different refreshment to stay cool.

Each park has its own selection of drinks including specialties and alcoholic. A popular past-time is to drink around the world at Epcot, which takes the focus away from drinking at other parks. This is a real shame because Disney’s Hollywood Studios has some fun drinks to try.

What goes better with a hot day than ice cream? Hollywood Scoops has a special item right now called the Chocolate Peanut Butter Explosion Shake. According to the App it’s “Chocolate Ice Cream layered with Peanut Butter Sauce, topped with Whipped Cream, garnished with Chocolate-Peanut Butter crumbles and a Chocolate-dipped Peanut Butter Cake.” Surprisingly, it actually tastes like a Reese’s Cup. It’s not overly sweet or heavy, however it is a lot for just one person. This is a great substitute for the traditional cone or cup.

Across the park in Star Wars they have several beverages from which to choose. Most noteably they sell Blue and Green Milk (a sort of smoothie) as well as various juices both with and without alcohol. The Blue Milk has a fruity flavor and the Green Milk a more tropical flavor. The juices are specialty combinations found at the restaurants.

Being in the sun all day it’s understandable that neither milk nor alcohol may be a good option. Luckily, they sell basic slushies throughout the park. Peevy’s Frozen Concoctions sells four flavors: Coke, Cherry, Blue Raspberry, and Lemonade. These are the perfect drinks since they are mostly ice and full of flavor. Other varieties exist around the park (i.e. Toy Story Land) which means you’re never far from a refreshing beverage.

Try something new and stay hydrated! 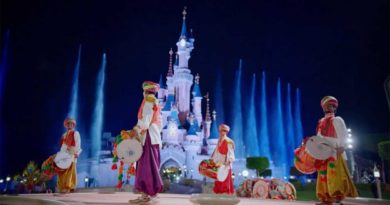