Just days ahead of the much-awaited launch of Marvel Studios’ “Black Widow,” Scarlett Johansson, Rachel Weisz and Kevin Feige, producer, president of Marvel Studios, and chief creative officer of Marvel, weigh in on the story of Natasha Romanoff’s past and the role the film plays in the future of the Marvel Cinematic Universe. “Black Widow”—the first film in Phase Four of the MCU—will launch simultaneously in theaters and on Disney+ with Premier Access in most Disney+ markets this Friday, July 9, 2021.

In Marvel Studios’ action-packed spy thriller “Black Widow,” Natasha Romanoff aka Black Widow confronts the darker parts of her ledger when a dangerous conspiracy with ties to her past arises. Pursued by a force that will stop at nothing to bring her down, Natasha must deal with her history as a spy and the broken relationships left in her wake long before she became an Avenger. Scarlett Johansson reprises her role as Natasha/Black Widow, Florence Pugh stars as Yelena, David Harbour portrays Alexei/The Red Guardian, and Rachel Weisz is Melina. Directed by Cate Shortland and produced by Kevin Feige, “Black Widow”—the first film in Phase Four of the Marvel Cinematic Universe— will launch simultaneously in theaters and on Disney+ with Premier Access in most Disney+ markets on July 9, 2021.

VIDEO: Discover Europe Like Never Before with an Adventures by Disney River Cruise 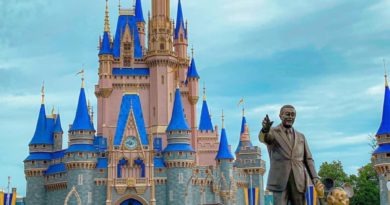 Take a Piece of the Galaxy Home: Shopping at Star Wars: Galaxy’s Edge in Disneyland Park