The following is a statement from Disney Media and Entertainment Distribution regarding Opening Weekend Performance of Disney’s Jungle Cruise:

Disney’s Jungle Cruise debuted at #1 this weekend, opening to an estimated total of more than $90M globally, including $34.2M in domestic box office, $27.6M in international box office, and over $30M in Disney+ Premier Access consumer spend globally.

“Jungle Cruise is the perfect summer adventure film, bringing a beloved theme park attraction to both the big screen and living rooms in a way that only Disney can. We remain focused on offering consumer choice during these unprecedented times, and it is clear that fans and families value the ability to make decisions on how they prefer to enjoy Disney’s best-in-class storytelling.”

Inspired by the famous Disneyland theme park ride, Disney’s Jungle Cruise is an adventure-filled, rollicking thrill-ride down the Amazon with wisecracking skipper Frank Wolff and intrepid researcher Dr. Lily Houghton. Lily travels from London, England to the Amazon jungle and enlists Frank’s questionable services to guide her downriver on La Quila—his ramshackle-but-charming boat. Lily is determined to uncover an ancient tree with unparalleled healing abilities—possessing the power to change the future of medicine. Thrust on this epic quest together, the unlikely duo encounters innumerable dangers and supernatural forces, all lurking in the deceptive beauty of the lush rainforest. But as the secrets of the lost tree unfold, the stakes reach even higher for Lily and Frank and their fate—and mankind’s—hangs in the balance.

Did you see Jungle Cruise over the weekend? If so, what did you think?

#DisneyMagicMoments: Cooking Up the Magic — Grab Your Waffle Maker for Our Leftover Stuffing Waffles Recipe 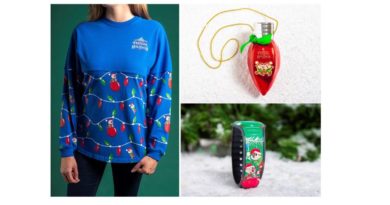 #DisneyMagicMoments: Cooking Up the Magic – Fan Fav Recipe From Taste of EPCOT International Festival of the Arts

Celebrate America at Disneyland Resort All Summer Long by ‘Visiting’ Iconic U.S. Destinations Inside the Parks