LAKE BUENA VISTA, Fla. – Spreading magic across the sky, over a castle and down a bustling street, the new “Disney Enchantment” nighttime spectacular debuts Oct. 1, 2021, at Magic Kingdom Park. This dazzling new show helps kick off “The World’s Most Magical Celebration,” an 18-month event in honor of the 50th anniversary of Walt Disney World Resort.

“Disney Enchantment” adds its own new chapter to the storied 50-year history of nighttime entertainment at Magic Kingdom in a breathtaking spectacle of Disney music, stunning fireworks, enhanced lighting and immersive projection effects that extend for the first time from Cinderella Castle down Main Street, U.S.A. It plays out above and around guests in ways never experienced before at The Most Magical Place on Earth.

Inspiring everyone to believe in the magic that lives within them, “Disney Enchantment” features characters, moments and music from cherished films from Walt Disney Animation Studios and Pixar Animation Studios. The show’s stirring soundtrack is anchored by an emotional original song, “You Are the Magic,” written and performed by multiple GRAMMY® winner Philip Lawrence, whose musical career began as a Disney cast member performing in Walt Disney World shows.

Cinderella Castle is aswirl in scenes of wonderment, thanks to state-of-the-art projection technology. Guests set sail across the sea with Moana, soar above the clouds on Aladdin’s magic carpet and more. These projections extend down Main Street, U.S.A., complementing the images on the castle while creating an entirely new immersive and expansive environment for Magic Kingdom.

In one spectacular sequence, Joe Gardner from Disney and Pixar’s “Soul” brings guests with him into “the zone.” As he plays his piano, shimmering blue and purple lighting extends beyond the castle, transporting guests into a magical realm inspired by the art of Disney Legend Mary Blair. This dream-like space is filled with characters from Disney classics such as “Beauty and the Beast” and “Alice in Wonderland” to contemporary tales including “Wreck-It Ralph” and Disney and Pixar’s “Luca.”

Through it all, these heroes discover they have only to look within themselves to find the power to believe and make dreams come true, because the magic lived inside them all along. The journey builds to a crescendo as Tinker Bell takes flight and spreads shimmering gold pixie dust over the park, empowering everyone to believe in themselves and the magic all around them. 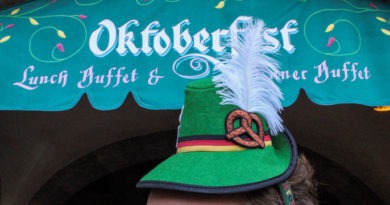 New Merchandise Has Arrived In World Showcase At Epcot