Most Disney fans have a hard time with change, I know I do. Especially when a favorite show or attraction is ending. Like with every show at Disney that retires, it’s not just about that show, it’s the memories that it holds too. Just like when “Wishes” and “Illuminations” wrapped up that final time, I had tugs at my heart because those shows meant something to my family. Amazing and meaningful memories are attached for sure!

With Happily Ever After, the memories are a little bit different, but still have meaning. Back in 2017 when Happily Ever After made its debut, I was asked to cover it for TMSM and was standing in the media area in the hub. I specifically recall watching that first time with MANY other Main Streeters on Facebook live.  I started crying when the Tangled part was revealed, the comments section was fill of sympathetic tears too. My fellow Disney criers!! I wanted to steam the debut so we could all experience it together, and it was perfect. That was one of the first major events that I was asked to cover for Disney. I was nervous for sure, but taking you all along with me was a comfort. So you see, we started that journey together!

Meet Up Weekend for us is always a special time, especially when it’s at Magic Kingdom.  Being able to spend the day with TMSM fans and friends is something I treasure, it’s my time to say thank you and get to know others.  Because of the meet ups, I have met some great people, and I’m beyond grateful.  Watching Happily Ever After with them, singing along together to the music, it’s just beautiful.  One of my biggest supporters who became family to me, my Fran, sadly passed away just before Happily Ever After premiered. She would have loved it.  That year at the 2017 meet up, we gathered with Fran’s family to watch the show together and remember her. I’ll never forget that night, it was raining but I’d stand in a monsoon for those I love. We held on to each other, cried… I remember watching her daughters singing “I Can Go the Distance” together. It’s a memory that I’ll always have in my heart. We left after the fireworks that night, soaked down to the skin in our wet clothes, but so thankful for everyone for being there.

Since 2017, I cannot count how many times we’ve seen Happily Ever After. Enough to know the music and to know which movie sequence is coming up next. It’s always a must on my birthday, minus this year because it still wasn’t running since the shutdown. My kids love this show too, even though they didn’t want Wishes to end at the time.  When friends come to town, taking them to see the fireworks at Magic Kingdom is always a favorite. Instead of watching the full show, I’m usually watching that person’s face to see their reaction. To see that, ugh, it’s fantastic! Last year one of my besties brought her husband to Disney for his birthday and I was determined to have him get the full experience, which included Happily Ever After. To see how amazed he was with the show and to hear him talk about it long after… that’s true Disney magic! He’s been officially bitten by the Disney bug!

I’ve been under the weather for the past few weeks now. But last night I knew would be the only opportunity I’d get to go see the fireworks one last time. It was extremely crowded, but we staked out our spot in front of the castle. I wanted to be up close to see the projections on Cinderella Castle. When the show started, I didn’t record any of it but the Tangled part, see below. I wanted to watch and enjoy it all, take it all in one more time. Did I cry? Oh of course I did! Like a baby! As tired as I was, it was still worth going out to see Happily Ever After one more time!

Watching with family and friends, at our TMSM Meet Ups, or being with someone who is seeing the show for the first time. It’s all true Disney magic in my book!

Yes, I was sad when Wishes retired, but Happily Ever After really grew on me and I loved it. Disney doesn’t usually disappoint, so I’m excited to see the new show this week to kick off Disney’s 50th Anniversary celebration. In with the new as they say!  I’m really going to miss Happily Ever After and all those memories that I have that coincide with such a magical show! How about you? 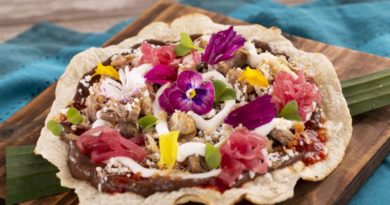 The First SUPER NINTENDO WORLD in the U.S. is Set to Open at Universal Studios Hollywood in 2023

Mickey Mouse: It’s a ‘Golden Age’ Wherever He May Be!