From the Universal Orlando Blog and written by: Linda Laguardia

ORLANDO, Fla. (March 3, 2022) – The good times continue to roll at Universal Orlando’s Mardi Gras, with 10 of the biggest names in music set to take center stage for exciting live concerts throughout March – including global superstar Khalid (March 18) and Grammy-nominated DJ Marshmello (March 6). Although additional Mardi Gras festivities – including a spectacular parade and savory cuisine – will continue through April 24, the March performances will wrap up this year’s star-studded concert series. See below for the remaining talent lineup.

In addition to the live concerts, partygoers can also revel in the following Mardi Gras festivities:

SAVORY FLAVORS FROM AROUND THE WORLD
Guests can take their taste buds on an international culinary journey by sampling more than 50 tasting-sized delicacies inspired by diverse flavors from around the world. Signature dishes include the tasty Crawfish Boil and melt-in-your-mouth Beignets from New Orleans, Coconut Curry Shrimp Laksa (a sweet and spicy noodle soup) from Southeast Asia, and Salchipapas (a popular street food made with sausage and potatoes) from Central America. The best way to experience all the flavors of Mardi Gras is with Universal Orlando Resort’s “Food & Beverage Card and Lanyard,” which allows guests to enjoy more for less by paying $65 for a $75 card and $120 for a $150 card.

“FLOAT FACTORY WAREHOUSE” TRIBUTE STORE
The Mardi Gras Tribute Store is back with an all-new theme, Float Factory Warehouse, featuring four highly themed rooms designed to depict the creative process of bringing a parade float to life. Guests will encounter everything from pencil sketches and scale models to colorful parade décor and props while exploring the latest Mardi Gras gear and themed treats. Click here for a full walkthrough video of the Mardi Gras Tribute Store and here to download photos of the store. 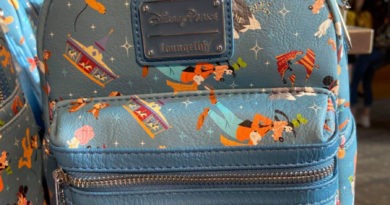 Celebrating my Hispanic Heritage Through Dance and Music at Disney