Disney+ has released a first look image of its upcoming all-new live action “Pinocchio,” which will premiere exclusively on the streaming service this September.

Academy Award® winner Robert Zemeckis directs this live action retelling of the beloved tale of a wooden puppet who embarks on a thrilling adventure to become a real boy. Tom Hanks stars as Geppetto, the wood-carver who builds and treats Pinocchio (Benjamin Evan Ainsworth) as if he were his own son. Joseph Gordon-Levitt is Jiminy Cricket, who serves as Pinocchio’s guide as well as his “conscience”; Academy Award® nominee Cynthia Erivo is the Blue Fairy; Keegan-Michael Key is “Honest” John; Academy Award® nominee Lorraine Bracco is Sofia the Seagull, a new character, and Luke Evans is The Coachman. 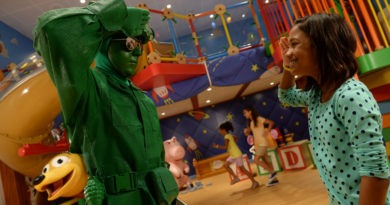 See How Disney Films Come to Life Onboard Disney Ships

Cook Alongside Remy with Interactive Chef Hat, Other Items, Inspired by Remy’s Ratatouille Adventure at EPCOT

Look So Cute in These Duffy and ShellieMay-Inspired Fashions at Aulani, A Disney Resort & Spa