Sources close to the production confirmed to EW that the All Stars 6 finalist filmed a scene for the Disney+ sequel in Rhode Island in November 2021 that sees three queens portraying impersonations of the Sanderson Sisters at a drag show — including Ginger as Bette Midler’s Winifred Sanderson. Later, the real Sanderson Sisters (Midler’s Winifred, Sarah Jessica Parker as Sarah, and Kathy Najimy as Mary) show up to the performance, and spectacular things ensue.

Earlier this month, footage reportedly shot on the set included images of Ginger in full Winifred Sanderson drag. Disney had no comment on Ginger’s involvement with the film.

EW also confirmed Monday through another source that Disney asked original Hocus Pocus actress Thora Birch back to reprise the role of Dani Dennison in the sequel, though the performer had to decline due to scheduling issues.

Disney+ announced last year that the new Hocus Pocus will pick up 29 years after the events of the original 1993 film, when the three central witches are again resurrected in modern-day Salem by three high school students — played by Gossip Girl’s Whitney Peak, Dirt’s Lilia Buckingham, and American Horror Stories’ Belissa Escobedo — who attempt to halt their plot for revenge.

“I am beyond thrilled to be involved in the sequel to a film that is as beloved as Hocus Pocus,” director Anne Fletcher previously said in a statement about the film. “Fans around the world have embraced these characters and have made this film a Halloween tradition whose popularity continues to grow, and how lucky am I to be back at Disney with these three extraordinarily talented ladies in the iconic roles they created, as well as our fabulous new additions to the cast?” 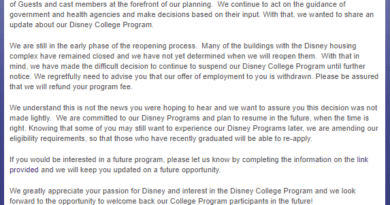 Internships & Programs for WDW and DL Canceled for Fall