During re-direct with his legal team, Depp said he hoped to give the Pirates franchise a “proper goodbye.”

Johnny Depp’s time on the stand continued Monday, with a re-direct from his own legal team following cross-examination by Amber Heard’s.

His lawyer first asked how the actor felt after reading Heard’s op-ed in The Washington Post, in which she claimed she was a victim of domestic violence. Depp was not named in the piece, but his lawyers argue it is strongly insinuated, and that his career suffered as a result. She has countersued Depp for $100 million.

“Shock,” he said of his initial reaction. “Because I, at that point, it had been a good, solid, two or so years of the accusations, of the allegations, planted firmly on my back. Something I had to carry with me and I just couldn’t believe it was continuing in such a way.”

“It was clear that the more bad press, the more hit pieces that came out on me, the more of these stories of Ms. Heard and her righteous chase against me … it wasn’t stopping,” he continued. “It’s difficult to, once you’ve chewed on it for a couple of years, it becomes difficult to swallow anymore, as it was completely untrue.”

When asked how the op-ed made him feel, he added, “Hurt. Blinding hurt.”

“It was like somebody hit me in the back of the head with a 2×4 and, as I said, I had had no ability to speak prior to … because even if I’d done an interview to try and explain myself, it turned into a hit piece. So my mouth was shut,” he added. “And this was the opportunity where I thought, something’s gotta be done. I couldn’t take it anymore.”

His team then wondered when he learned Disney wouldn’t continue to cast him as Captain Jack Sparrow in future “Pirates of the Caribbean” films. He said it was about 2-3 days after the op-ed, referring to an interview Disney’s Sean Bailey did with The Hollywood Reporter, which was published two days after the WaPo piece and insinuated they’d be continuing the franchise without him.

“Captain Jack Sparrow was a character I built from the ground up and was something that I, of course, put a lot of [myself] into the character and also having worked on these films with these people and added much of myself, much of my own re-writing of the dialogue and scenes and jokes,” claimed Depp. “I didn’t quite understand how, after that long relationship and quite a successful relationship certainly for Disney, that suddenly I was guilty until proven innocent.”

He said he had been approached “to take part in Pirates 6,” adding, “My feeling was that these characters should be able to have their proper goodbye, as it were. A franchise can only last for so long and there’s a way to end a franchise like that and I thought that the characters deserved to have their way out, to end the franchise on a very good note. I planned on continuing until it was time to stop.”

When asked about Heard’s lawyer referencing Depp saying that he wouldn’t return to the franchise for $300 million and a million alpacas, the actor said he made those comments after “there was a very deep and distinct feeling of having been betrayed by the people that I had been working with, the people I had worked hard for, people I had delivered a character to that they initially despised.” He added that he said that in 2021. The op-ed and Bailey’s comments came out in 2018.

Celebrate the God of Mischief with New Merchandise, Food and Beverage and a New Look for ‘Loki’ at Avengers Campus

Brand-New Spa, Salon and Nightlife Experiences for Adults Coming to the Disney Wish 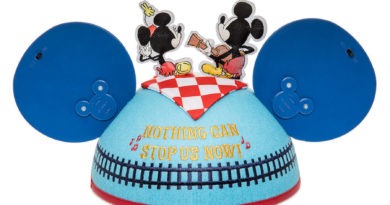