****Warning: Explicit language, may be offensive to some readers***

Johnny Depp briefly reprised his most iconic role for a fan outside of the courthouse amid his defamation trial.

A few weeks ago, the star broke hearts around the world by announcing that he would never again play beloved pirate Captain Jack Sparrow.

However, in a video that is going viral on social media, it looks like the actor may have gone back on his word – if only for a few moments to make a fan smile.

Depp is currently embroiled in a $50 million defamation trial against his ex-wife Amber Heard, who he is suing over a 2018 op-ed she wrote for The Washington Post. According to Depp, the article – in which Heard claims to be a survivor of domestic abuse – wrecked his reputation and his career, getting him dropped from big-budget franchises including the Pirates of the Caribbean movies.

While Depp maintains that it was him and not his ex-wife who was the real victim in their tumultuous marriage, Heard is adamant in her allegations. The Aquaman star is countersuing Depp for $100 million, citing several occasions during their relationship when she claims he was physically abusive.

Now, one fan has caught a very special interaction with the actor in which he steps into character as Captain Jack Sparrow – even if only for a moment.

In the clip, Depp can be seen interacting with his fans as he pulls up to the Virginia courthouse. One woman can then be heard shouting to him: “You’ll always be the Captain Jack Sparrow,” Depp obliges by adopting the character’s iconic voice.

a fan tells johnny depp he will always be captain jack sparrow and he responds with jack’s voice 😭 pic.twitter.com/a8vnzDl4oS

“He’s still around somewhere, I see him now and again,” the actor said with a grin.

“He shows up now and again,” Depp continues.

The clip quickly went viral on social media, where fans were overjoyed to see Depp back as Jack Sparrow for a few moments.

Over the past few weeks, the blockbuster trial has been making headlines around the world and had many viewers glued to their screens.

Among the shocking revelations about Depp and Heard’s violent marriage, the ongoing legal proceedings have also given an insight into Depp’s relationship with Disney studio execs who dropped him from the Pirates movies once Heard’s allegations went public.

Johnny Depp on Disney firing him but still selling merch in the parks pic.twitter.com/6LYzIcr8ud

Depp told jurors that he felt betrayed by the studio, adding that he would not reprise his role in the films even if they offered him
“$300 million and a million alpacas”.

The announcement broke fans’ hearts – but that hasn’t stopped them from flocking to the courtroom in Fairfax, Virginia so they can cheer Depp on. 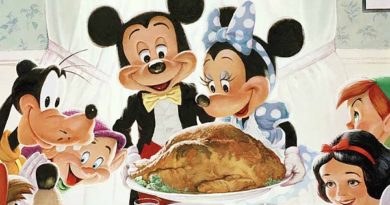 Fight Breaks Out Over ‘Spider-Man: No Way Home’ Tickets at Theater