Earlier this month, filmmaker Quentin Tarantino shared in a popular podcast interview his feelings as it relates to actors in the Marvel Cinematic Universe. Specifically, that he thought they were not actually “movie stars.” Following these remarks, Marvel Cinematic Universe Star Robert Downey Jr. has shared his own thoughts on Tarantino’s comments.

“I think our opinions on these matters say a lot about us,” Downey explained. “I think that we are in a time and place that I unwittingly contributed to, where IP has taken precedence over principle and personality. But it’s a double-edged sword. A piece of IP is only as good as the human talent you get to represent it, and you can have some great IP even if it’s coming from an auteur or a national treasure of a writer-director, and if you don’t have the right kind of artist playing that role, you’ll never know how good it could have been. I think that creatively it is a waste of time to be at war with ourselves. I think this is a time when everything is so much more fragmented now that I think you have this kind of bifurcation. Throwing stones one way or another … and I’ve had my reactions in the past when people said things that I felt were discrediting my integrity … I go, “You know what? Let’s just get over it. We’re all a community. There’s enough room for everything,” and thank God for Top Gun: Maverick and Avatar: The Way of Water. That’s all I have to say. We need the big stuff to make room for films like Armageddon Time.”

“I’m not talking about trickle-down entertainment,” Downey continued. “I’m just saying that things are always changing and I’m at a place in my life where I’ve now gone back to back, working with Chris Nolan on what was an exceptionally transformational experience for me; having been in pre-production post and bringing Sr. to market; and the next thing I’m doing is a series with my Mrs. and the director Park Chan-Wook, based on a Pulitzer book called The Sympathizer. It’s already a transformative, literally playing five different roles experience for me. So, I would just say, before we cast aspersions on each other — undergo your own renaissance and see if it doesn’t change your mind a little bit. Reinvent yourself before you decide that somebody else doesn’t know what they’re doing or that something is keeping you from doing your best, or that something is better than something else. You know, we’re in this age now where Favreau said it best: We used to try to make waves in a lake, and now we’re just trying to catch people’s attention as things are moving by quickly in a stream. I think that’ll change again, but this is just where we’re at. And to accept it and be grateful that you get to participate is the right place to start.”

If you were not following along with this story, here are the comments that were originally made by Tarantino on the 2 Bears, 1 Cave podcast, where he originally discussed his thoughts on Marvel Cinematic Universe actors:

“You have all these actors who have become famous playing these characters,” Tarantino recalled to the podcast. “But they’re not movie stars. Right? Captain America is the star. Or Thor is the star. I mean, I’m not the first person to say that. I think that’s been said a zillion times… but it’s like, you know, it’s these franchise characters that become a star.”

What are your thoughts on Robert Downey Jr.’s response to Quentin Tarantino’s claims of Marvel actors? Let us know in the comments! 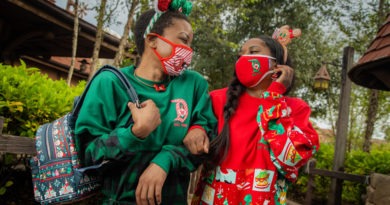 ‘Tis The Season for New Merry Merchandise Coming to Disney Parks and shopDisney.com