At the start of “Mickey’s Christmas Carol,” a choir sings “Oh, What a Merry Christmas Day,” although it wasn’t yet Christmas Day when the theatrical featurette premiered in the United States. It was actually December 16th of 1983, and audiences rejoiced not only in the spirit of the season, but also because Mickey Mouse was returning to the big screen–where he’d last been seen in 1953. This charming adaptation of Charles Dickens’ Yuletide ghost story cast Mickey as Bob Cratchit, a lowly clerk to Ebenezer Scrooge, portrayed by Donald Duck’s uncle, Scrooge McDuck. A stellar group of Disney stars joined in: Goofy, Jiminy Cricket, J. Thaddeus Toad and even Willie the Giant … but the film’s most emotional moment was given to none other than the lovely Daisy Duck.

Daisy can currently be seen in all her smiling, golden glory as one of the Disney Fab 50 Character Collection, enlivening The World’s Most Magical Celebration – 50 Years of Walt Disney World. Of course, Daisy’s statue is not far from her beloved Donald’s, and the pair strike carefree poses as they look towards Liberty Square from the Plaza Hub in Magic Kingdom Park.

Daisy dances into a literary classic in this vignette illustration from the opening title of “Mickey’s Christmas Carol” (1983).

In “Mickey’s Christmas Carol,” Daisy plays the role of Isabelle, a flirtatious miss who has precisely the same carefree flair, although this time in Victorian-era London. Isabelle is a happy memory shown to young Ebenezer Scrooge, a dancing darling who easily wins his heart and makes good use of the mistletoe at the famous Fezziwig party. Though the not-yet hard-hearted Scrooge is smitten, as time leaps forward the audience sees that money replaces poor Isabelle in his affections. Thus, Daisy is tasked with portraying Isabelle as a heartbroken torch-carrier who finally realizes that the flame of love has frozen over. Her shattered heart literally breaks on the screen, and as Isabelle sadly leaves Ebenezer to his gold, Daisy has one of the finest dramatic moments of her career. She starts to exit Scrooge’s office, and as the winter snow falls outside, she glances back from the open door with wistful regret for what might have been.

The well-honed dramatic abilities that Daisy displayed as Isabelle are the result of a long and successful film career at the Walt Disney Studios. After her initial screen bow in “Don Donald” (1937), the young starlet came into her own a mere three years later with the film “Mr. Duck Steps Out” (1940). Then, she is addressed as Daisy for the first time, and demonstrates not only her appeal as a femme fatale but as a jitterbug dancer to reckon with. Great care was taken with Donald and Daisy’s intricate choreography in this film. Many years later, Walt Disney’s very first film star, Disney Legend Virginia Davis (the live-action Alice in the silent “Alice Comedies” of the 1920s) often fondly reminisced that she was asked to use her Hollywood dance expertise and assist production artists by filming animation reference for this picture. When the film opened, the ducks’ dance steps were dubbed “The Donald Duck Doodle,” and were dissected in detail in national magazines (under the authority of Dance Educators of America, Inc., no less). Illustrated features in the November 1940 issues of “Song Hits” and the new “Walt Disney’s Comics and Stories” christened the dance’s individual moves with names like “The Ducky,” “The Waddle” and “The Whacky Quacky.” “Mr. Duck” was a hit … and a certain Miss Duck was on her way to fame!

“Mr. Duck Steps Out” inspired dance steps which were illustrated and described in the second issue of “Walt Disney’s Comics and Stories” magazine. (K.K. Publications, Vol. 1, No. 2, November 1940)

Daisy became a busy duck, co-starring with Donald both on and off screen as a great romantic pair. Although many of their movies played up Donald’s unpredictable temper (and Daisy’s efforts to curb it), there was no doubt that their courtship was the real thing–and they were often seen blissfully beak-to-beak. In a sweetly telling scene, in “Donald’s Crime” (1945), Donald can be seen singing dreamily as he marks off the calendar days until he and Daisy have their next dance date. As with many comedic stars, some turnabout often makes for particular fun, and Daisy got to be the one to lose her temper with great abandon in “Cured Duck” (1945). She has another moment of justifiable pique in “Sleepy Time Donald” (1947) when after saving Donald from a night of reckless sleepwalking, he wakefully ridicules the notion–and is “booted” back to sleep by his erstwhile protector.

Like most Disney animation stars, Daisy’s look has evolved. Whether dressed in a period costume or trendily fashion-forward, Daisy has a particular glamour that can even outshine that of her best friend, Minnie Mouse. In her DON DONALD debut, she wore a traditional shawl and mantilla to match the film’s setting. For “Crazy Over Daisy” (1950), Daisy went spectacularly “fashion-backwards” with a 1900s corset, bustle and parasol. With a fantasy role in “Donald’s Diary” (1954), Daisy foreshadowed the mid-century chic of a Sandra Dee with her full skirts, bouffant bangs and high-riding ponytail.

Fashion has remained a staple of Daisy’s career. She continued the ponytail, but to a greater extreme through the television years of “House of Mouse” (2001) and “Mickey Mouse Clubhouse” (2006). She then tied it all up with “Minnie’s Bow-Toons” (2011). When Daisy made her long-awaited “Duck Tales” debut in season three of the 2017 version of that series, she appeared with a stylized version of her “Donald’s Diary” hairstyle, but with a sleeker, more sophisticated wardrobe.

No one likes a copycat … or a copy dog! It turns out that Daisy’s original fashion print has already been claimed by a disdainful dalmatian on this comic book cover for “Walt Disney’s Comics and Stories.” (Gold Key – K.K. Publications, #316, Vol. 27, No. 4, January 1967) (Cover art by Disney Legend Carl Barks) (Author’s collection)

Naturally,
Daisy Duck has enjoyed meeting her fans at Disney Parks around the world. She
had the opportunity to develop her entrepreneurial skills in 1993 with the
debut of Daisy’s Diner, part of the Disneyland, California incarnation of
Mickey’s Toontown. Soon, this newly expanded eatery will re-open as the Café
Daisy, complimenting a beautiful new re-imagining of “the land that toons
built.” Daisy’s ongoing presence at Walt Disney World, “The Most
Magical Place on Earth,” focuses once again on her terpsichorean skills.
As part of the Mickey and Minnie’s Runaway Railway attraction at Disney’s
Hollywood Studios, Daisy presides over a dance studio where attendance is
mandatory–and delightful. High atop Disney’s Riviera Resort at Topolino’s
Terrace, she herself brushes up on her footwork during the “Breakfast à la
Art,” with painter Mickey, writer Minnie and sculptor Donald also
showcasing their creative abilities.

Daisy and her friends
are out to explore the brand-new wonders of Walt Disney World on this special
issue cover of “Walt Disney Comics Digest.” (Gold Key – Western
Publishing, No. 32, December 1971) (Character art by Tony Strobl) (Author’s
collection)

The varietal career of Daisy Duck is not only wide-ranging, but it is incomplete! More film, television and attraction roles await, although she will always make time for her fans–and her boyfriend–as well. Daisy is certainly a duck who does not have all her eggs in one basket … and aren’t we all the happier for it?

See Daisy Duck in her memorable role as Isabelle in “Mickey’s Christmas Carol,” now available for streaming on Disney+. 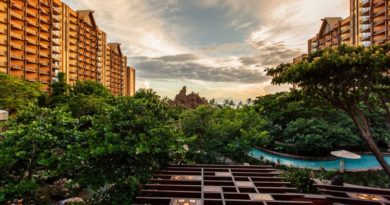 #DisneyMagicMoments: National Geographic’s SHARKFEST is Back and the Disney Parks Sharks Could Not Be More Excited!