The wait for Tron: Light Cycle Run at Walt Disney World’s Magic Kingdom has seemed like light-years. However, the wait is slowly coming to an end and in a first look at the ride Good Morning America recently took a trip on the rollercoaster and it looks amazing!

If you don’t remember, Tron: Light Cycle Run was first announced to be coming to Walt Disney World at D23 Expo on July 15, 2017 with its opening originally set for Walt Disney World’s 50th anniversary in Fall 2021. Although, due to the COVID-19 pandemic, the opening date was pushed back quite a bit. Finally, the ride has an opening set and we couldn’t be more excited!

To view the first look, you can watch it on ABC News by clicking HERE.

Below is the official description of the attraction as listed on the Walt Disney World website:

Lean forward into the ultimate race of survival! Leave the real world behind and join Team Blue in an epic quest across the Grid—the dark, computerized world with no horizons from TRON. Here, there’s no limit to the excitement.

Climb aboard your very own Lightcycle and take off on a high-speed adventure, racing against the Grid’s most menacing Programs. Surge past your fierce opponents as you attempt to cross through 8 Energy Gates and secure your team’s victory—so you can survive to race another day.

Scheduled to open in Spring 2023, TRON Lightcycle / Run will be one of the fastest coasters at any Disney theme park in the world.

From the Big Screen to the Theme Park

In 1982, Disney made filmmaking history with TRON, the first production of its kind to mix live action with computer-generated visuals and backlit animation. This iconic film went on to inspire video games, comic books, an animated series and the 2010 sequel TRON: Legacy—as well as this new Disney theme park attraction.

What are your thoughts of this first look of this futuristic ride? Are you excited to finally experience Tron: Light Cycle Run when it opens at Magic Kingdom in Spring 2023? Let us know in the comments!

Hakuna Matata! runDisney Virtual Series to Honor the Timeless Majesty of ‘The Lion King’ This Summer 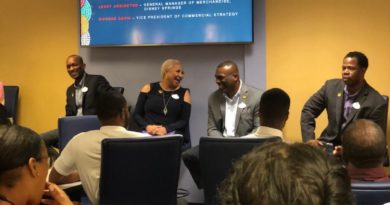 #DisneyMagicMoments: Go Behind the Magic of Aulani, A Disney Resort & Spa

The More Juneau: What an Alaskan Disney Cruise Means to Me