Star Wars: Galactic Starcruiser opened less than a year ago to date and it is slashing its rates again in an attempt to increase bookings. For those who’ve never looked into staying at the immersive Walt Disney World hotel, it costs roughly $5,000 per couple for only two nights and closer to $6,000 for a family of four.

The hotel, which opened on March 1, 2022, has only 100 rooms. However, the hotel struggles to sell out on a regular basis. In November of last year the company announced discounts of up to 30% for Disney Vacation Club members. At $5,000 for two days, a 30% discount is quite the discount for a regular priced, premium experience–one you’d never see at some of the other deluxe resort hotels around the Walt Disney World property.

In another attempt to bring guests to the hotel, Disney announced a discount to non-DVC members: Guests with a reservation for the Starcruiser can get a discount up to $700 if they also book accommodations before or after at another participating Disney World hotel. The biggest discounts — $350 per night — are for packaging a Starcruiser stay with additional nights at the Beach Club, Grand Floridian or Yacht Club resorts. The offer is valid for stays between February 5 and September 30, although there are some blackout dates.

As of Sunday, only Presidents’ Day weekend is fully booked until mid-May.

For those not familiar with this experience from a galaxy far, far away, below is the official description of the hotel:

Arrive at the Walt Disney World Resort terminal, board a launch pod and rendezvous with the magnificent Halcyon starcruiser. Stay in a cabin or suite with an exquisite view of space. Throughout the ship, you’ll interact with an eclectic collection of characters, sit down to exotic galactic cuisine and perhaps even plot a secret mission together.

As the itinerary continues, you’ll take the story further and deeper. Choose your path. Seek out the inner workings of the legendary starship, learn the traditional art of wielding a lightsaber and even jump on a transport to the planet Batuu—where your mission continues at Star Wars: Galaxy’s Edge!

What are your thoughts on Disney continuing to discount this experience to get more guests? Let us know in the comments! 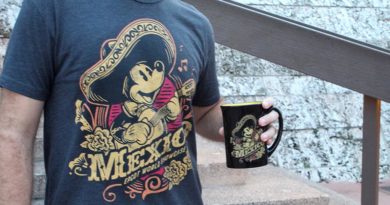 Cook Alongside Remy with Interactive Chef Hat, Other Items, Inspired by Remy’s Ratatouille Adventure at EPCOT